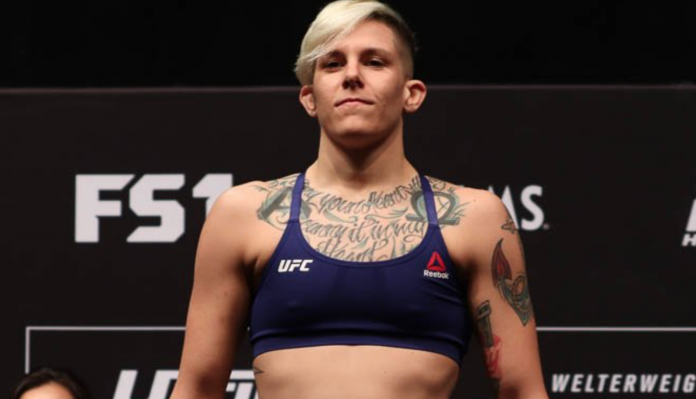 Macy Chiasson is a natural featherweight. She competed at featherweight on The Ultimate Fighter 28, and ended up winning the season at that weight. However, she is moving down to bantamweight for her next fight, which will pit her against Gina Mazany at UFC 235 on March 2.

This is a rather interesting move for Chiasson given the fact she has fought her entire career at 145 and won TUF at featherweight. Yet after talking to her coaches and working with the UFC Performance Institute, she decided the timing was right to move down a division.

“It is kind of a decision that my coaches and I, and some professionals made along the way,” she said. “I never saw myself at 135, but my last weight cut was so easy. I got to 144, and I felt like I could have kept going like it was the easiest weight cut I have ever had. You know, I still have a little bit of fat to get rid of, like I’m not the leanest that I could be. 135 was a sit-down and a talk and a decision we made across the board.”

While the UFC featherweight division is notoriously thin on fighters, Chiasson says this wasn’t a big part of her decision to drop to bantamweight, though it definitely helps that there are more fighters in that division.

“That wasn’t really a part of our thought process when we were thinking about moving down to 135. When I look at it now, standing outside looking in, I realize there isn’t a lot of people [at featherweight],” she said. “It is unfortunate because I really wanted to see that division go. You see more and more ‘35ers moving up to ’45 and taking over the division. I don’t see anything wrong with moving up and down, I don’t see anything wrong with going to 135.”

As Macy Chiasson gears up for this drop to the bantamweight division, some fans have worried that she might struggle with the weight cut. She says that won’t be a problem.

“There is no worry there, I am going to make bantamweight no matter what,” she explained. “I don’t care what anybody says. When I sign something I always do what I am told and what is expected of me. There is no question I am going to make 135 pounds. There is always a concern when you are cutting weight that it is not fun, but you will see me at that weight on March 2.”

A big part of her confidence comes from the fact that she is working with the UFC Performance Institute to assist with her nutrition and weight cut. Even though the fight is not for three months, she is already in the process of slimming down.

“I’m actually working with the Performance Institute and they already have everything planned out for me,” Chiasson said. “I’m on a schedule and on time with my schedule, and I need to be a certain weight every week. It is a lot more strict but it is doable, and that is the thing people need to realize.”

There is no looking back now, Macy Chiasson will fight at bantamweight next but isn’t closing the door on returning to featherweight. The hope is the UFC builds up that division so she can fight often, between both divisions.