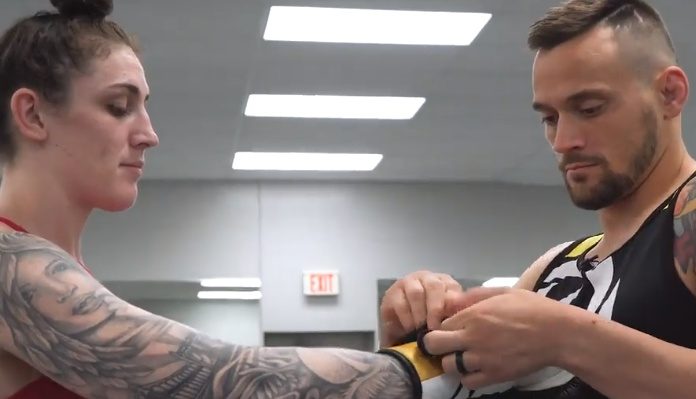 In the world of mixed martial artists, one will find some of the most unique individuals in all of sports.

With team sports like football or basketball, it’s not uncommon to see a former player wind up as a coach one day after that chapter of their life closes. But to do each at the same time? It’s just not possible or even allowed.

It would be a challenge in itself to find a group of athletes that like to attack challenges more than those in combat sports. Which is what makes Lee’s Summit, Missouri’s own James Krause so special.

A veteran of over 32 professional MMA bouts, Krause has been competing since 2007 and has worked his way to the highest level by rising through the ranks of Titan FC, IFC, RFA, WEC, and Bellator.

With all the many variables that go into the incredible science and instinctual activity of fighting, there are many ways to get ahead of the game. There are always new ways to evolve being discovered. These evolutions can take oneself from a vanilla and predictable combatant to a hybrid.

There are many ways the term ‘hybrid’ can be used. Especially in MMA. But for Krause, it comes in the form of great knowledge and teaching ability combined with world-class skills.

On top of being a fighter, Krause leads the charge as the head coach of Missouri’s premier MMA gym, Glory MMA & Fitness which plays home to some of the UFC’s best talent.

What may be a struggle for some is balanced out seamlessly by Krause.

Since his win over Alex White in January, these six months have been used primarily for helping coach his fighters as well as the participants of The Ultimate Fighter 27 on Team Stipe and sorting things out in his personal life.

That doesn’t mean that getting back in there himself hasn’t been on Krause’s mind.

“[The UFC] actually offered me the fight [with Leonardo Santos]. At the time that I was offered the fight, I was debating on what weight class that I would like to go in. Whether I was going ’55 or go back and try ’70 again. I just really…if I was going to ’55, I wasn’t ready to do it again. It’s a really tough cut for me to make, so I really didn’t want to do it. I’m a much tougher welterweight, so it just didn’t make sense for me to do at the time.

There was a lot of things going on, I had in my life going on, personal and stuff like that. Nothing bad, just a busy time for me. The schedule just didn’t make sense for me, so we’re looking at hopefully getting in, in a couple of months. That would be good to get back in and get back at it.”

Often times, those deserving of the most credit are working under the radar. When you’re so busy and putting all the focus onto others let alone yourself, it might not give the opportunities to shout the loudest.

While molding the next generation of fighters, it may be forgotten how good Krause is as a fighter despite his claims of saying he’s a far better coach.

In his last 16 outings, Krause has gone 13-3 with one of those losses stemming from controversy after a groin strike that was mistaken as a body shot and another via close split decision. Currently on a four-fight win streak with a stint on TUF 25 thrown in between, there’s plenty of untapped wisdom to be gained from the 32-year old. Something TUF 27’s Team Stipe got to experience first hand.

“It was great [coaching on Team Stipe]. You get all the benefits of being on The Ultimate Fighter, without any of the terrible things having to go home. It’s pretty much a vacation to train. It’s great. It was a phenomenal experience. Getting to share knowledge with all these young, hungry guys that want to be in the gym every day.

Some of them are kind of immature in the game. They don’t understand it, so I think someone like me that’s had 50 fights. I’ve had 55 fights total, amateur, and pro. I think I bring a lot of value to some of these young kids that…I was in their spot at one point. I think the information is valuable, especially me being on the show. I give those guys a lot of tips.

I was in the same house with them, so I told them which side to go to the house. I feel like there’s a better side. I told them if they need anything, how to get it. I gave them a lot of tips and tricks. I felt like I really brought a lot of value to our team in that sense.”

Some fighters can definitely be considered better coaches than fighters. And it usually swings one way or the other which makes Krause’s work all around that much more impressive.

It also has to be considered, if the talented hybrid types weren’t the humble ones…would they be able to succeed in the facets they do? Probably not, which gives an added value and even greater perspective.

Anderson made her long-awaited UFC debut earlier this month and the team, unfortunately, didn’t get the results they desired when taking on the task of overcoming former UFC bantamweight champion and all-time boxing great, Holly Holm.

But just for the experience alone of participating in that contest, Krause knows that his protege will grow tremendously.

“I always look at fighting as kind of like whenever you get in there two people bring a…I don’t know how to explain it. Imagine each fighter had like a stat bubble above them. Let’s say, for example, on…I don’t know. On Holly’s stat bubble, she’s got a high fight IQ, good boxing, her clinch-work might be a little different, or whatever. She has this bubble that’s over her head in fighting.

Then we have Megan’s bubble who’s super explosive, powerful, nice at range. Whenever you fight, those bubbles kind of clash. Whenever you’ve experienced that, it’s like buying a new car kind of. Whenever you sit in the car the first time, you’re like, ‘Oh, man. This is crazy,’

Let’s say I got a Ferrari and I let you sit in it. You’re like, ‘Oh, man. This is nuts. This car is awesome,’. If you sit in that Ferrari every day for a year straight, at the end of it, it’s not a big deal, because you’ve experienced that. It’s not new anymore.

Whenever two people fight, especially when they have a clash of styles like those two, they kind of pull from each other. Megan’s unique experience for 15 minutes with Holly Holm is… She experienced what that high level feels like, what the clinch feels like, what the footwork, the fighter IQ. Of course, we’ve already picked up numerous things from that fight. Yeah, I mean, of course, just having the 15 minutes to share with somebody else like that at that level is…you get a ton from it, a ton.”

In the MMA world, every single person has their own special story that’s just waiting to be told. There are lessons to be shared, lessons to be learned, roads to be traveled, experiences to be had. But most importantly it’s about enjoying the process.

For ‘The’ James Krause…his story is that of how he is the student but also the master.