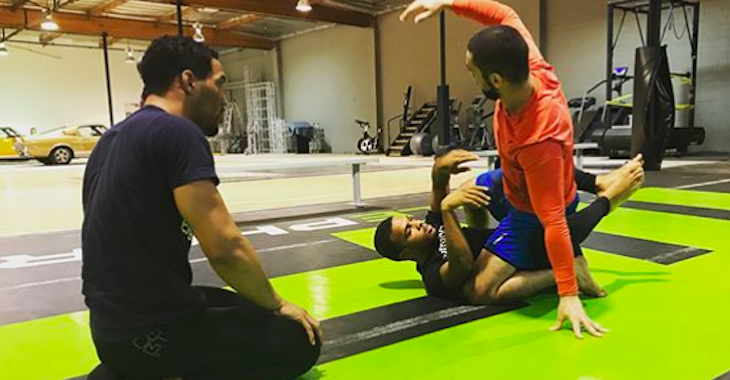 In the wake of his submission loss to UFC interim lightweight champion Tony Ferguson, Kevin Lee has been looking for ways to freshen up his game. He’s hoping renowned MMA coach Firas Zahabi can help him with that.

Speaking on the latest episode of BJ Penn Radio, Lee explained that he’ll be doing some work with Zahabi over the coming weeks.

“I’m actually heading over right now to work with Firas Zahabi,” Lee said on the show. “I want to get a different feel, and get different eyeballs to look at my game. I’m trying to change up a lot of stuff. So next time y’all see me, and next time I fight, the fans are really going to be able to see something different. You know what I mean? I really want to bring a lot to the game in this year, and I got big dreams ahead of me.”

Lee then recounted the dinner conversation that influenced him to take Zahabi on as a part-time coach.

“Just last [week], I had dinner with him, and he was even breaking down my game from the first minute that I met him. That was like the second piece of the conversation that he had for me, what all I did wrong in the fight [with Ferguson], and how to fix it, and it’s just good to have new eyeballs, and especially with somebody like that.”

“[Ferguson’s] super awkward, he’s hard to time,” Lee continued. “He can take a hell of a punch. I realize the mistake that I made, especially in the preparation, in getting warmed up and getting ready for the fight, I walked into that area, I was ready to fight. I was too pumped up. That was one of the first things Firas said to me, too. ‘you’re using a little too much energy right out the gate.'”

While Kevin Lee will continue to live and train in Las Vegas, rather than relocate to Montreal where Zahabi is based, he’s excited to see how some work with legendary coach will improve his overall game.

“I’m still going to be working over at the [UFC Performance Institute], still over at Robert Drysdale’s, still at Xtreme Couture, but I’m trying to supplement it while I’m outside of camp. Outside of camp is where I’m able to learn, and correct the things in my game. I think that’s the most important thing right now. I’m looking at the long-term. Some of these dudes is calling me out to try and fight in March and all that, and it’s like I’m looking for the big numbers. I’m looking for much bigger than that, so I don’t know. I’m sitting on the game. I’m correcting a lot of stuff, and changing up my team and whatnot.”

How do you think Kevin Lee will benefit from the tutelage of Firas Zahabi?