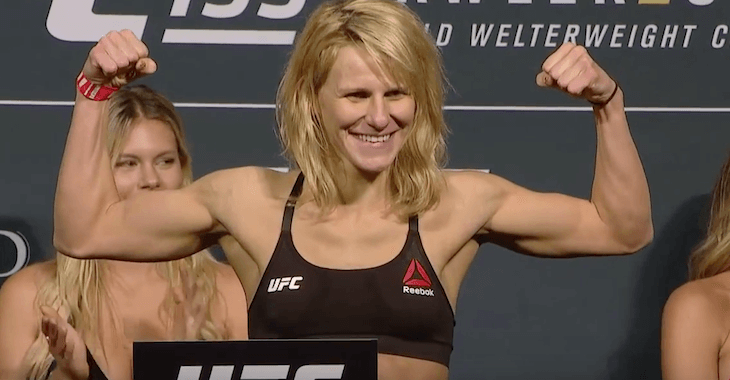 Kish will meet Ji Yeon Kim, who will be dropping down to the flyweight division from the women’s bantamweight division at a yet to be announced January 20 fight card in the USA.

Breaking! Justine Kish will move up to flyweight to take on Ji Yeon Kim on January 20 at a yet to be announced UFC event in the US. #UFCNews

The UFC announced earlier this year that they would be creating the women’s 125-pound flyweight division. The current season of The Ultimate Fighter 26 consists of a female cast of competitors that are fighting to become the inaugural UFC women’s flyweight champion in the season finale.

Justine Kish holds a 6-1 professional MMA record going 2-1 in the UFC. Kish’s last fight was at UFC Fight Night 112 against Felice Herrig where she lost for the first time in her professional career. Herrig won by unanimous decision after their three-round fight went to the judges. Ji Yeon Kim holds a professional MMA record of 6-1 with two draws. The South Korean fighter made her UFC debut against Lucie Pudilova at UFC Fight Night 111 in June where she lost a three-round bout by unanimous decision.

Who are you expecting to win this UFC women’s flyweight fight? Let’s get your prediction in the comment section on how and when this one ends!