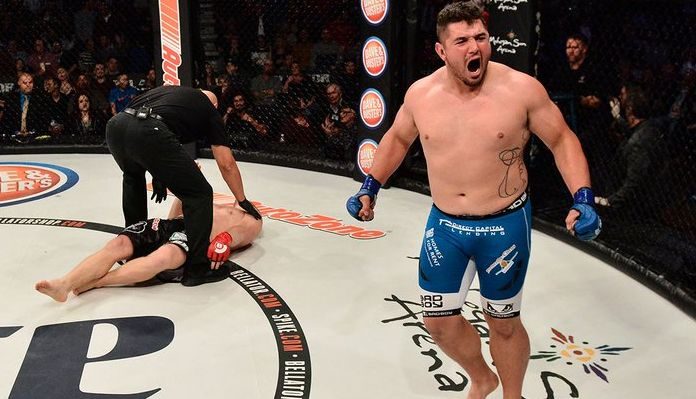 Bellator recently announced they will be heading to Hawaii on back-to-back nights on December 14 and 15. While both cards will feature title fights, another fight that is a rather interesting one is former UFC heavyweight champion Frank Mir will be taking on Bellator veteran Javy Ayala on the first of the two cards.

Javy Ayala received the call to fight Mir in September and knew it was too good of an opportunity to pass up.

“When I first heard about the matchup against Frank I was excited,” Ayala said to BJPENN.com. “I’ve been a fan of him since I started my MMA career.”

While the fight against Mir will be a tough one from a competitive vantage point, it is  tough on Ayala for another reason. The California native has suffered back-to-back losses and the pressure is on to get back on track. Ayala lost a decision to Roy Nelson before getting knocked out against Cheick Kongo back in May at Bellator 199. Even with Ayala riding a two-fight losing streak, there was not a thought to fight a lesser known opponent to get back to the winning ways. The veteran wants to fight the best of the best and fighting Mir is exactly that.

“I’ve always been the type to not back away from an opportunity,” Ayala said of why he accepted the fight with Mir. “For me, this is an opportunity of a lifetime.”

A great opportunity indeed. Ayala knows he has what it takes to the win the fight. The training he is doing leading up to the fight is all the proof he needs.

“This fight will be exciting and I’ll take the win as I get it,” he said. “Whether I knock him out or tap him out. We are working on all parts of the game so we can be prepared for wherever the fight goes.”

The fight is not until December. On fight night, Javy Ayala gets to make dreams come true when he fights Mir in Hawaii. For Ayala, however, the priority is to get back to his winning ways. With a win, he knows he can start making a run to the top of Bellator’s heavyweight division to an eventual title shot.

“There is a lot of tough guys in the heavyweight division and Frank is one of the top-tier athletes,” he said. “A win over him will make a big statement.”

Do you think Javy Ayala can take out Frank Mir this December?