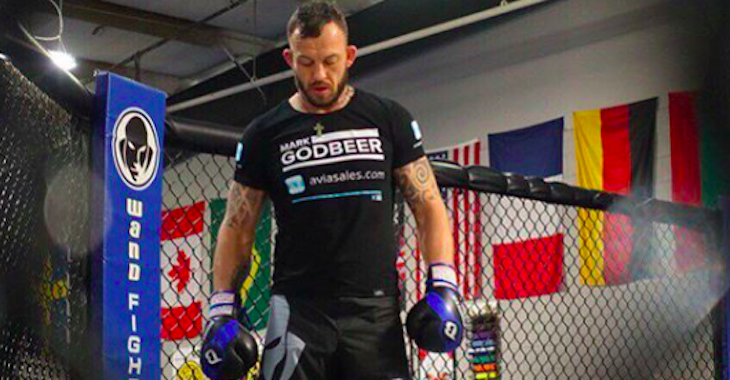 If things had gone according to the initial plan, the UFC 216 main card would have featured a heavyweight scrap between ranked contenders Derrick Lewis and Fabricio Werdum. The undercard, meanwhile, would have featured a collision of rising heavyweights Walt Harris and Mark Godbeer. Yet what we ended up with was a heavyweight scrap between Werdum and Harris, which Werdum won with a first-round armbar.

It was all the result of an unfortunate back injury, which forced Derrick Lewis out of his fight with Fabricio Werdum. Though it briefly sounded as though the undercard bout between Mark Godbeer and Walt Harris would replace Werdum vs. Lewis on the UFC 216 main card, Harris was instead pulled from his bout with Godbeer, and plunked into the cage with Werdum with mere hours to prepare.

On the latest episode of BJ Penn Radio, Mark Godbeer ran through the events leading up to his foiled UFC 216 fight.

“At the time, the UFC had their backs against the wall, you know?” An understanding Godbeer said. “A lot of people paid to watch the Werdum fight. So, I don’t blame [the UFC]. They had to make a decision, and unfortunately, my fight got cut.”

“I’m not scared to say it, I felt like crying” Godbeer continued, delving into the emotional strain he endured. “As anyone who is in this position knows, fighting at the top level, the fight game is an emotional rollercoaster. On fight day, we go through every single emotion you can think of, and to have things change like they did… I didn’t know what was going on.”

Thankfully, Godbeer got paid in spite of his fight being cancelled – a fact that he’s obviously quite happy about. His fight with Harris has also been rescheduled for UFC 217 on November 4 in New York.

“In the UFC’s defense, they have looked after me, and me and Walt Harris are now scheduled to fight on the New York card,” he said. “It turned out ok. It was a strange turn of events. No one was to blame. Decisions had to be made, and I have been compensated, and the UFC has looked after me. They know what I went through and I’ve been appreciative for it.”

While Godbeer wouldn’t wish the kind of emotional turmoil he experienced on anyone, he said that the whole ordeal is ultimately feeling like a blessing in disguise.

“Let’s get one thing clear: I’ve read a lot of Tweets, people saying ‘at least he got paid.’ Yeah, I did get paid and stuff, and like I said it’s no one’s fault, but unless you’ve been there, unless you’re a fighter, the emotions I went through, I wouldn’t put on anyone.”

“It’s worked out in my favour. At the time I didn’t see it, I was like ‘man, I’m fucking pissed off'”, Godbeer continued. ““But I’ve come home, I’ve re-evaluated, and literally the next day, the UFC – because of the turn of events with Walt and Werdum, I don’t think Walt got injured – so it just made sense. Bang, [the UFC said] ‘let’s get a hold of both guys again, let’s put it back on for New York’. And that’s what they’ve done, the UFC. Literally the next day, the fight was rescheduled.”

Catch Mark Godbeer back in the cage at UFC 217.