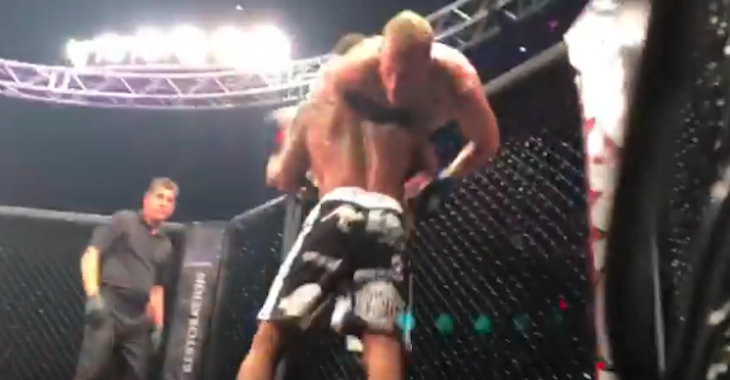 Last week, UFC and World Series of Fighting veteran Gerald Harris picked up a gruesome, slam-induced stoppage win, badly breaking his foe’s arm to force the end of the fight. In the subsequent moments, Harris seemed elated – even pleased about his opponent’s injury – but apparently, this wasn’t the case. Despite the tidal wave of trash talk Harris received in the buildup to this fight, he harbored no ill-will toward his opponent, and didn’t even know he’d broken his arm until later.

“A lot of people, they watched the video, and you can’t judge a book by it’s cover,” Harris said on episode 55 of BJ Penn Radio. “It looked like I was celebrating the injury, and I was overreacting, but man, everything that happened before that… This guy cursed me out at weigh ins, he was three pounds overweight, he tried to fight me at weigh ins, and then before the fight he was yelling at me, and then in the fight he was yelling at me, and right before I slammed him, literally, the round before that, he was giving me the ‘suck-it’ sign, he was like ‘F-you, you ain’t no slam king, you can’t even slam me b*tch.’ Then a minute later, that same hand he was flipping me off with was crooked as hell behind his head. There was so much karma in that moment. I don’t have anything against the dude, he’s a fighter and he does what works best for him, but he just disrespected me a little bit too much.”

“I thought I just knocked the wind out of him,” Harris continued, explaining he wasn’t initially aware of the arm-break. “I didn’t know! Anybody that’s fought, when you knock somebody out, when you finish somebody, the last thing you’re thinking about is how they’re doing. I mean seriously. My whole goal in there – you just kicked me in the face, and kneed me in the stomach, I’m not worried about you. Then, once that adrenaline goes down, you’re like ‘ok, what happened?’ Then I looked on the screen and I was like ‘OH! This dude’s arm!’ Like I didn’t know.”

“He apologized, I said ‘don’t apologize.’ When a fight’s over, it’s over man. I was happy that it worked out in my favor.”

This was the fourth slam-induced stoppage on Gerald Harris’ impressive record. What did you think of it?