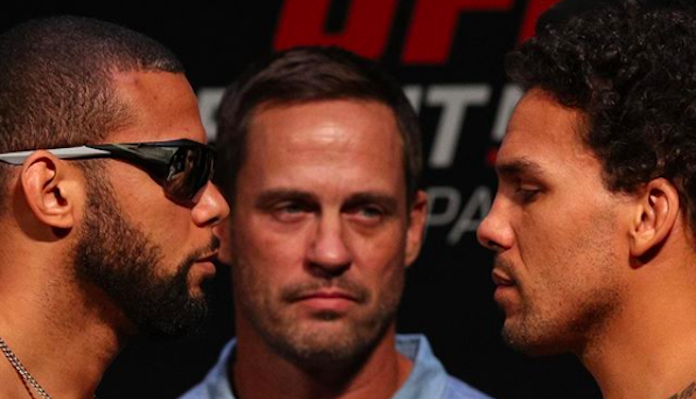 Eryk Anders has had a busy year.

The middleweight fought Lyoto Machida in the main event of UFC Fight Night 125 in Brazil in February. He then fought Tim Williams at UFC Fight Night 135 in August, and then accepted a quick turnaround for another main event fight against Thiago Santos in late September. Anders will also be fighting at UFC 231 in December against Elias Theodorou.

Eryk Anders had a very hard fight against Williams, with the momentum going back and forth before Anders got the head kick knockout win in the third round. The hope was the former college football player would take a break and fight in December, but an opportunity came to fight Santos in the main event of UFC Fight Night 137 just a month after his fight against Williams.

The natural middleweight took the fight on just days’ notice, and the fight was at light heavyweight, not at middleweight. Even with all these extra variables, it was an easy call for Anders to accept the fight.

“They had to come with the stimulus package. I got a new contract out of the deal and a couple incentives,” Eryk Anders said in an interview with BJPENN.COM. “I like to fight, and that was my favourite fight regardless. Me and my manager, it wasn’t hard for them to come with a little more, a little more cheese. The offer they made made it really hard to say no to them.”

After accepting the fight and getting a new deal, Anders was off to Brazil with little to no training. Through the early phases of the fight, he held his own, but after the third round, he was completely drained and collapsed to the ground to try and catch his breath. The fight was then waved off by the referee.

“I had been sparring, I had been doing other stuff,” Anders said. “I think that if I didn’t fight a month before, if I had just a little bit longer to get ready before the fight… That is a pretty good scrap me and Tim Williams had. I needed some time to heal up and rest and let some stuff heal up and what not.

“[After that fight] I sat down for a week and did some light sparring and moving around, no cardio, strength or conditioning nothing like that,” Anders continued. “I think if I could change one variable in that Santos fight… if I don’t fight a month before, if I get a little bit of time before the fight, I think I come out of that fight with my hand raised.”

Although Anders lost the fight, his stock went up due to his incredible, short-notice performance. And while some thought that would be it for Anders for the year, he was offered a fight with Theodorou shortly thereafter.

Anders had been gunning for Theodorou for some time. After helping the UFC by accepting the Santos fight on short notice, he believes the promotion rewarded him with the fight he wanted.

“It wasn’t a verbal incentive or anything like that, but they know that is the fight I wanted,” Anders said. “That is the fight I asked for. I kind of did them a solid by stepping in and fighting Santos. They kind of rewarded me with the offer.”

“I think for my career, middleweight is definitely the route I need to go,” he said. “I can fight at 205. Like I said I love to fight, I’m down to fight anybody. I wanna make my run at 185. If they offer me enticing fights at 205 then for sure I am going to take those.”

Do you think Eryk Anders can take out Elias Theodorou at UFC 231 this December?