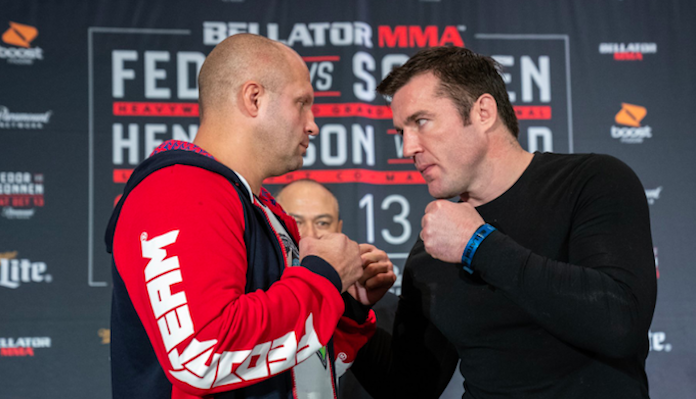 On Saturday night, after tonight’s Bellator 207 card, Bellator MMA will touch down in Uniondale, New York with Bellator 208. This second card of the weekend will be headlined by a  Heavyweight Grand Prix semifinal showdown between former UFC middleweight and light heavyweight title challenger Chael Sonnen and heavyweight legend Fedor Emelianenko.

On Friday morning, the many talented fighters competing on the Bellator 208 bill took to the scales to weigh in for their imminent battles.

Perhaps the most interesting detail of these weigh-ins is that Sonnen, the former middleweight, tipped the scales just nine pounds lighter than the career heavyweight Emelianenko. Needless to say, Emelianenko will not actually have all that much of a size and weight advantage in the cage.

Bellator 208 will be co-headlined by a lightweight bout between former UFC lightweight champ Benson Henderson and long-time Bellator lightweight contender Saad Awad. Both fighters made weight, tipping the scales at an identical 155.8 lbs. Finally, main card heavyweight attractions Cheick Kongo and Timothy Johnson weighed in at 239.2 and 265.6 respectively.

On the undercard, two fights were cancelled as the result of fighters missing weight.

Here are the full Bellator 208 weigh-in results, via MMAjunkie.

Two fights have been canceled from tomorrow's #Bellator208 card: Robson Gracie Jr. vs. Jamal Pottinger (who missed by 6.2 pounds) and Frank Buenafuente vs. James Gonzalez (who both missed weight).

Which fights on the Bellator 208 bill are you most excited for?