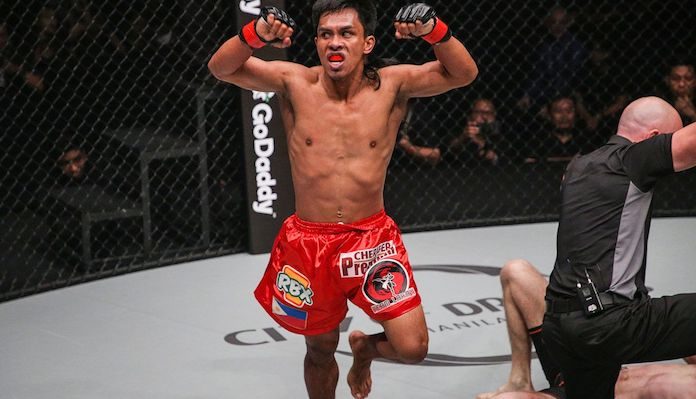 The first time Filipino knockout artist Kevin Belingon met Bibiano Fernandes in the ONE Championship cage, things didn’t go the way he planned. Instead, he was submitted by the dominating ONE bantamweight champion in the very first round.

On November 9, at ONE: Heart of the Lion in Singapore, Kevin Belingon, who now wears the ONE interim bantamweight belt, will have a second chance to topple the seemingly unstoppable Bibiano Fernandes. This time around, he’s confident he can pull it off. A lot has changed since their first fight, after all.

Speaking on episode 102 of BJPENN.COM Radio, Belingon divulged that, when he first fought Fernandes, his Brazilian jiu jitsu just wasn’t up to snuff. Since then, however, he’s patched up the holes in this part of his game, which should mean a much tougher night for Fernandes.

“My BJJ at the time was very weak, so after a fight, I focused more on my wrestling and grappling techniques,” he said. “My BJJ is better now compared to last time.”

“We know that his BJJ is very dangerous so, we’ve focused more on grappling and wrestling defense,” he added.

“The training camp is good. We’re preparing for this bout because we know that this is going to be a big match. So, everything’s good in the camp.”

Given the long-time bantamweight champion’s accolades on the ground, Kevin Belingon says he’s hoping to keep this fight standing, where he feels he has an advantage.

“Well I think it’s going to be mixed, but I’ll try my best to put the fight on stand-up,” he said. “Because I know that’s my advantage.”

Wherever the fight unfurls, Kevin Belingon is certain it will be a fun one for fans in attendance in Singapore and those watching on screens around the world. And in the end, he believes he’ll come out on top.

“This fight is going to be very exciting, and I’ll really try my best to win the fight, to take that belt. So, the fans shall expect a very exciting fight between me and Bibiano.”

“I’m very very confident that I’m going to get the win.”

Do you think Kevin Belingon can end the longstanding reign of Bibiano Fernandes at ONE: Heart of the Lion on November 9?