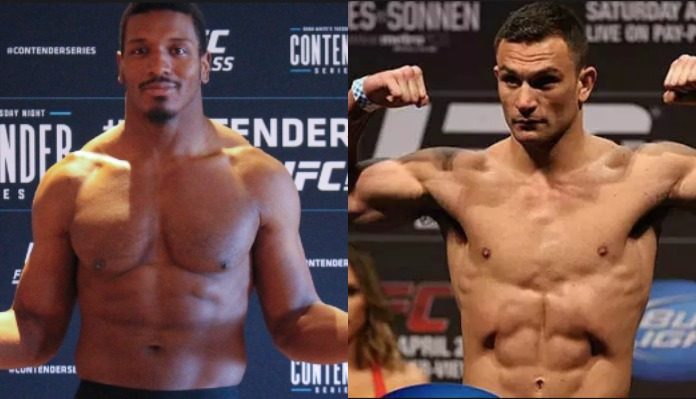 Undefeated light heavyweight prospect Alonzo Menifield (7-0) did not let his opportunity on Dana White’s Tuesday Night Contender Series go to waste. Instead, he laid waste to his opponent Dashawn Boatwright in a mere eight seconds, earning himself a UFC contract in the process.

Having earned this UFC contract, Alonzo Menifield is now eagerly awaiting his promotional debut. While nothing is set in stone just yet, he’s hoping to make this debut at UFC 229 on October 6th — perhaps against somebody like Scotland’s Paul Craig or Moldova’s Ion Cutelaba.

“I’m hoping October 6th,”Alonzo Menifield said on the latest stacked episode of BJPENN.COM Radio, which also featured Duane Ludwig, Colby Covington and Darrion Caldwell. “The funny thing, before [UFC 229] became a big fight [card], I was planning on fighting Las Vegas October 6th, so I was hoping that I get on that card. Whoever I fight, that’d be fantastic. I was thinking fun fights would be like Paul Craig or anyone. I don’t know, whatever. But I just mentioned [Craig] because what his rep has been.”

“Ion Cutelaba, if I’m saying his name right, I’d like to mix it up with him,” Menifield added.

While Menifield is interested in debuting against Paul Craig or Ion Cutelaba, his true dream matchup would be one with New York’s Gian Villante.

“Dream matchup? Gian Villante,” Menifield said. “I’d fight him. He’s a big, powerful guy. He’s been in [the rankings] for a long time.”

Whatever the case, Alonzo Menifield is just excited to get his UFC career underway, and with a little luck, work his way into title contention with a few big wins. As new light heavyweight contenders like Anthony Smith have proven, after all, it doesn’t take a whole lot of time to reach the top of the division at present.

“We look at Anthony Smith, right? He’s up there with Volkan [Oezdemir in the UFC Moncton main event] and he gets a title shot [if he wins]. Yeah, I’m definitely gonna be up there in a matter of no time.”

Who do you want to see the fearsome Alonzo Menifield fight in his UFC debut? How far do you think he can go in the perilous UFC light heavyweight division?