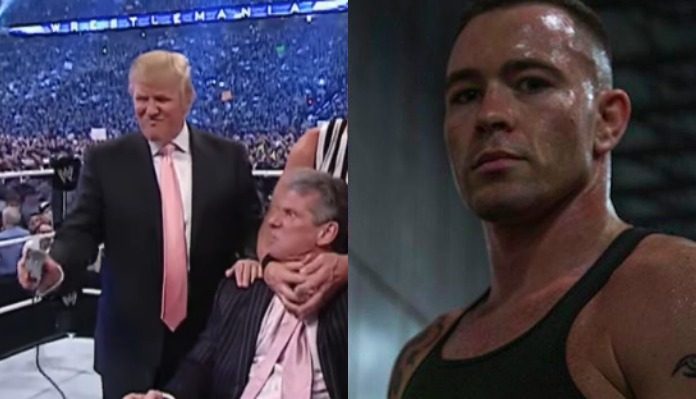 Earlier this month, current UFC interim welterweight champion Colby Covington did what he said he’d do, and met with US President Donald Trump at the White House.

Speaking on the latest episode of BJPENN.COM Radio, Covington discussed this meeting with Trump — which he says was the best day of his life. He also shared a story Trump told him about one his multiple WWE appearances.

“It was the best day of my life,” Colby Covington said. “I actually gave him the title [belt], and he sat at his desk. We shared some stories. We laughed a little bit, we just hung out for a good 30, 45 minutes and just bull-shitted. He’s a big MMA fan, big UFC fan, and big wrestling fan. I didn’t know he used to wrestle back when he was in high school. So it’s pretty cool that we come from the same lineage, wrestlers. I guess that’s what all the greats come from.”

“We were bull-shitting, but he told me a funny story about pro wrestling, and this WWE match for WrestleMania,” Covington said. “He had a hair versus hair match with Vince McMahon in the pro wrestling match. Vince told [Trump], ‘Hey, hit me hard but don’t hit me in the eyes or the nose. So, just hit me in the forehead.’ So Trump’s like, ‘Okay, okay.’ And then in the moment he accidentally hit him in the nose and in the eye, and afterwards he was like, ‘Oh, I just got so caught in the moment, Vince.’ And then he saw him the next day, and Vince’s face was all busted up. His eye was all cut, and his nose was all messed up. It was pretty funny.”

Needless to say, Colby Covington is very gracious for the opportunity to meet President Donald Trump.

“[UFC President Dana White] kept his word and made it happen for me,” Covington said. “I’m thankful that I asked for this. Don’t forget that I had to win my fight. I had to be a winner. [Trump is] a great American winning machine, and I had to win this fight. But the fact that Dana had the connection and was able to get me there, it was really awesome.”

Were you surprised when Colby Covington pulled of his goal and met the president?