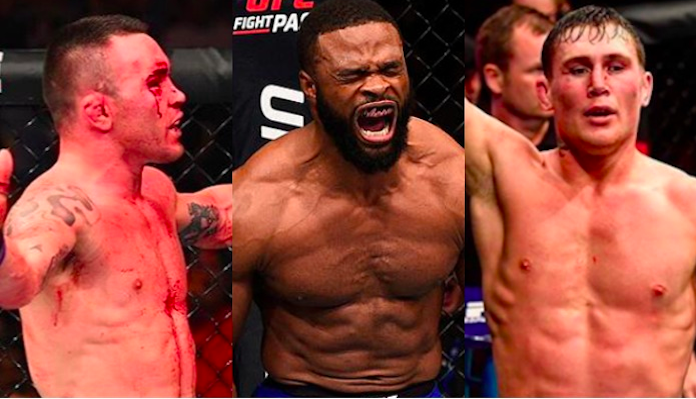 UFC welterweight champion Tyron Woodley will attempt his next title defense in the main event of UFC 228 on September 8, when he takes on undefeated British striker Darren Till. Originally, of course, it was expected that Woodley’s next title defense would pit him against current interim welterweight champion Colby Covington. Yet the UFC wanted to book the fight for UFC 228, and when Covington wasn’t able to accept that date, the promotion gave the shot to Till.

Colby Covington believes that was a serious error on the UFC’s part. By his estimation, UFC 228 is doomed to be a pay-per-view disaster.

“They don’t sell fucking pay per views in the UK [where Till is from], and obviously no one cares about Woodley,” Covington said on the latest episode of BJPENN.COM Radio. “He always has to piggy back off Jon Jones, and piggy back off Connor McGregor to make his money. So we know he can’t sell pay per views, so let’s be honest, this isn’t gonna do over 100,000 buys. They should have just waited for me.”

Meanwhile, Covington feels that a card headlined by himself and Woodley will probably be a pay-per-view home run.

Whatever the case, Colby Covington is hoping Tyron Woodley wins at UFC 228 so he can fight him later this year.

“I never thought I would say this, but I’m actually rooting for Woodley,” he said. “I want him to win, because I don’t want him to fuck up everything I built. I built this fight with him for over a year and a half. I’ve been begging to fight him, dude, he’s ducking me every shot he can. So I’m begging for Woodley not to fuck this up.”

Do you think a card headlined by a grudge match between Tyron Woodley and Colby Covington would be a PPV success?