Exclusive | Alan Jouban: Luke Rockhold is definitely with the right modeling agency and could make some big money

Alan Jouban (14-4 MMA) is one of the hottest prospects in the UFC’s stacked welterweight division. “Brahma” has gone 5-2 under the UFC banner and is currently riding a two-fight win streak.

The 33-year-old is currently recovering from surgery, this to repair a broken hand suffered in his latest octagon appearance. With that said, Jouban is already planning his UFC return, as he hopes to compete again this December in Sacramento, possibly against veteran Patrick Cote.

Besides being a budding star inside of the octagon, Jouban is also very accomplished in the world of male modeling.

Alan, who has a deal with top designer brand Versace, was a recent guest on BJPENN.com’s Rapid Fire where he discussed what it is like being both a fighter and a model and why former UFC champion Luke Rockhold could score big in the industry:

“Luke Rockhold was signed by the same agent who found me. His name is Jason Kanner and he owns Soul Artist Management and he is very very good at what he does. He’s the one, well him and my fight manager, they’re the ones who orchestrated the whole Versace deal.”

“I don’t know what Like has done yet. I haven’t seen anything. He might be shooting stuff right now and maybe it comes out in a year. You know how those things are. So maybe he has shot something and that is what he is referencing. As far as I know, he (Luke) hasn’t landed any major jobs.”

Jouban continued by stating that Luke Rockhold could definitely score a “big deal” due to both his looks and his name:

“Luke does have a pretty big name. He has been the (UFC) champ already. You know, he’s the number 1 or 2 guy and is a former champion. So the possibility is definitely there for him to make some big money. He just has to land some big jobs with major designers and it will come.”

“Luke is definitely lined up with the right agency. Soul Artist Management specializes in working with men and they are the ones who jump-started Channing Tatum. They discovered him and got him to be really popular.” 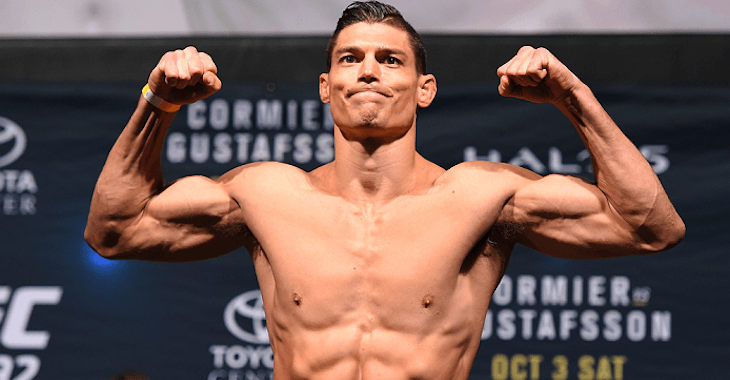 As for Alan Jouban’s current deal with Versace…

“My deal with Versace is absolutely the largest payday I’ve had in my career.”

Do you think Luke Rockhold will be able to land a major modeling deal similar to Jouban’s with Versace? Sound off PENN Nation!