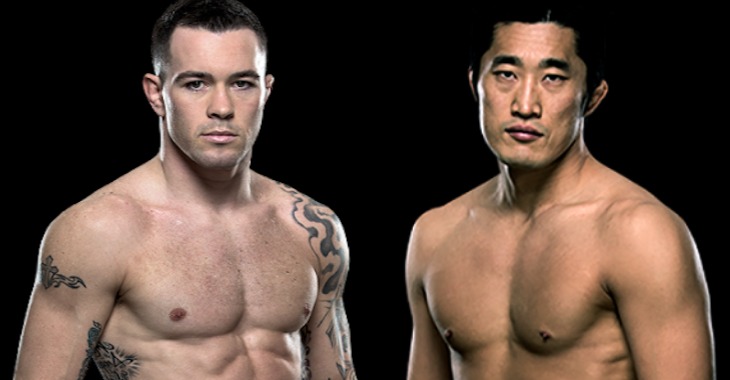 Rising UFC welterweight Colby Covington has spent the last few weeks campaigning for a fight with former lightweight champion Rafael Dos Anjos, who recently announced his plan to jump up to welterweight. Unfortunately for Covington and his fans, Dos Anjos opted to sign on for a fight with former Strikeforce champ Tarec Saffiedine instead. The two former champs will meet when the UFC touches down in Singapore this June.

With Dos Anjos off the table, Covington has instead been pencilled in for a fight with South Korea’s Dong Hyun Kim, which will also occur in Singapore. In the opinion of Covington, this bout is actually a more valuable opportunity than the one he was originally chasing with Dos Anjos.

He explained this feeling on Wednesday’s edition of BJ Penn Radio.

Covington then offered up an early prediction for the fight, explaining that he expects a fairly decisive win over the South Korean contender.

“He likes to go forward, and I like to go forward,” he said of Kim. “I like to control the center of the ring. I think it’s a great matchup for me. I think I can really expose him and make him look bad. I can hurt him, you know? He’s only lost to a couple of guys – those guys that are top-5, Condit and Woodley, but I’m a different fighter. He’s not going to be able to take me down, his judo’s not going to work against me. You’re going to see my evolution as a fighter.”

Covington then explained that we’ll soon see him break away from his wrestling roots – which is likely to catch many of his opponents off guard.

“I feel confident in my skills everywhere,” he said. “I’m not just a wrestler anymore. I’m racking up the takedowns and getting in the record books for takedowns, but it’s my pace that I’ve learned to put into my striking. You’re going to start seeing me be violent, finishing guys violently because they think I’m [going to be] wrestling.”

Do you think Colby Covington can take out Dong Hyun Kim in Singapore? Sound off, PENN Nation!