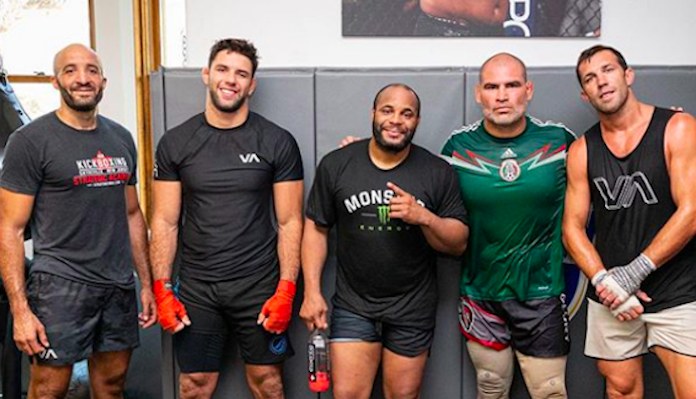 It’s a transition the Brazilian heavyweight has been plotting since 2015, but one that finally come together when his manager, Ali Abdelaziz entered into a new partnership with the Singapore-based martial arts organization.

“ONE Championship is an event I’ve always wanted to be part of,” Buchecha told BJPENN.com on Wednesday. “When I had the conversation with Ali, my manager, it happened, just like that. He’s the best in the business.

“I know [ONE Championship CEO] Chatri [Sityodtong] too,” he added. “When I met Chatri, I saw how they treat the athletes like martial artists. That’s what we are. That’s something amazing for me. To sign with them was something really amazing.

“It’s time for a new challenge.”

Unsurprisingly, being around these hugely successful fighters has been a boon as he gears up for his MMA journey.

“I’m learning a lot about the hands, the boxing, with Jason Parillo, he’s helping me a lot with that,” he said. “I’m also spending a lot of time at AKA. I spent a couple weeks at AKA training with DC for his fight [against Stipe Miocic at UFC 252] this weekend. So it was a great opportunity for me to spend a lot of time with these guys.

“They are helping so much. Even small advice from these guys is priceless. It’s a unique opportunity to have to train with these guys, to learn from these guys. They support me 100 percent. I’m really grateful to call these guys friends.”

Buchecha says he’s been particularly inspired by Cormier, who preceded his legendary MMA run with a massively successful wrestling career.

“He’s a legend, nobody can deny that,” Buchecha said of Cormier. “For me, in my opinion, DC and Cain Velasquez are the greatest heavyweights of all time. I think [Cormier] had a perfect career. It’s amazing to see a guy from the grappling, the wrestling, do the transition [to MMA] and be so good. For me it’s really inspiring. That’s one guy that’s a big inspiration for me.”

With Cormier and the other killers at AKA supporting him, Buchecha is targeting an MMA debut under the ONE Championship banner early next year. While his BJJ arsenal will make him an immediate threat to any fighter to faces, the 30-year-old is content to take his time on his journey to MMA glory.

“There are a lot of great names [in the ONE Championship heavyweight division,] but of course, I’m always trying to take it one step at a time,” Buchecha said. “I have to learn to walk before I run. It’s going to take awhile before I fight those big names, of course. I have to worry about my debut first, and that’s my focus right now.”

While Buchecha is keen to get his footing in MMA before he starts challenging ONE Championship’s top heavyweights, he’s already on the radar of reigning ONE heavyweight champion Brandon Vera.

Speaking to the Manila Standard, Vera referred to Buchecha as a “monster” and said he feels “very lucky” to have the opportunity to potentially fight the BJJ legend in ONE Championship.

Buchecha was understandably quite honored to hear this praise from the ONE heavyweight champ.

“That’s amazing,” he said. “Brandon is a great champion. He’s a monster. I’ve followed his career since he was in [the UFC]. He’s doing so great in the heavyweight division, so that’s something inspiring to hear. To hear these good things about this guy is amazing. But at the same time—of course it could happen because we’re in the same division, same organization—it will take awhile. It’s not going to be now. He’s a great champion, and a great guy, and it’s really great to hear good things from him. He’s a monster.”

For the moment, Buchecha is focused on making a successful MMA debut, and introducing himself to fans that are not yet familiar with his handiwork.

“I’m one guy, when I put myself in a position to compete, I always give it 100 percent,” he said, explaining what fans can expect from his MMA career. “Always in jiu jitsu I have this mindset, to kill or die. I go with 100 percent or I don’t go. That’s how I always think when I step on the mats. When I’m going to fight, I’ll give it 100 percent. That’s something I can promise, to give my best and give great show for the people watching and supporting me.”