Surprisingly, there are a number similarities between these two gigs.

“I got stung every day,” Aung La N Sang tells BJPenn.com, looking back on his beekeeping career after a long day of getting punched in the face by his fellow pro fighters at HardKnocks 365 in Fort Lauderdale, Florida.

Aung La N Sang became a beekeeper after moving from his native Myanmar to the United States for college, where he studied agricultural science. He specialized in dairy sciences, but ended up interviewing for the beekeeping job, and happily took the position when it was offered.

It was enjoyable work, he says, but he eventually decided to commit to his burgeoning mixed martial arts career, which had slowly been picking up steam in the hours outside his work with the bees.

After this career-change, Aung La N Sang spent several years bruising in promotions like Ring of Combat, Cage Fury Fighting Championship, and even Bellator. During this phase of his fighting career, he battled notable foes such as Costa Philippou, Uriah Hall, and Jonavin Webb.

Yet it wasn’t until 2014, when he was offered a contract with growing, Singapore-based promotion ONE Championship that his mixed martial arts career really began to take flight.

It was an opportunity he wasn’t expecting, but one he didn’t dare let slip away.

“We liked the promotion,” he recounts, looking back on his first impressions of ONE. “And I’d get to fight in Asia — that was cool too.”

ONE sniffed out Aung La N Sang amid goals of promoting an event in his native Myanmar. Even in those early days of his career, he had a following in the country, and the company recognized his value.

“They had heard about me,” he says. “They were planning on going to Myanmar at the time, and some people in Myanmar already knew about me. So it made sense for them.”

While ONE initially signed Aung La N Sang with the objective of bringing him to Myanmar, he didn’t actually return to his homeland until his second bout with the promotion: a clash with Mohamed Ali. The fight headlined ONE’s Union of Warriors card, inside the Thuwanna Indoor Stadium in the capital city of Yangon.

The returning Burmese hero wound up winning by first-round submission in front of a roaring crowd — and his own father, who he hadn’t seen in a decade. 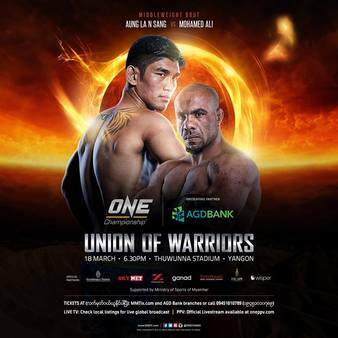 “I always believed that one day I would be a champion,” he says

Given the mammoth successes the former beekeeper has achieved in ONE Championship, it should come as no surprise that he’s regarded as one of the promotion’s biggest and most valuable stars. Yet his journey is far from over.

In fact, it’s arguable that everything he’s achieved hitherto has merely been rising action, and that he’s currently barreling toward something of a career climax.

On October 13, in the main event of the ONE: Century double-header in Tokyo, Japan, Aung La N Sang will attempt to defend his light heavyweight belt opposite slimmed-down ONE Heavyweight World Champion Brandon Vera. It’s been billed as the biggest bout in ONE Championship history. Whether that’s in reference to the scale of the contest or the sheer size of the competitors involved, it’s a hard claim to argue with.

Aung La N Sang says its humbling to be a part of such an important bout.

“Through the course of my career, there were a lot of downs; a lot of losses,” he says. “I have 10 losses on my record. To be able to reach this high in my career is amazing.”

The bout itself, of course, will not be easy.

He admits not every day trading mitts with these titans of combat is easy. In fact, some days he simply gets his ass kicked — but those days serve a clear purpose.

As diligently as Aung La N Sang has been preparing for this battle with Vera, he recognizes that it will likely not be an easy night at the office. He is well aware of his foe’s weapons.

“He has a quick left kick — a quick left high kick and a quick left body kick,” he says of Vera. “He’s got some good weapons that he’s ended fights with previously. I’m assuming his Greco wrestling will be good in the clinch. We’ll see — you never really know until you’ve grabbed the person, until you get hit by the person.”

To combat Vera’s strengths, Aung La N Sang believes he’ll have to rely on the ring-craft and cunning he’s developed over his lengthy career; from the days when he was still tending to his bees, to his time in Ring of Combat, to his incredible run in ONE.

“My experience is going to matter,” he says.

If all goes according to plan, Aung La N Sang will leave Tokyo with another successful title defense on his record, and even more importantly, the biggest single victory of his career. Yet that’s not where his work ends. After this fight with Vera, he intends to continue defending both his titles as frequently as possible, and continue to develop as a martial artist n the process.

No matter how the next chapters of his mixed martial arts career unfold, however, it’s safe to say that Aung La N Sang has come a long, long way since his days as a beekeeper.

“Everybody has goals,” he says of his journey so far. “I had goals. At the beginning of my career, it was almost like a straight line to those goals, but along the way, it’s gone up and down, it’s gone in a circle, it’s done three-sixties. I’ve contemplated retirement. I’ve thought about doing something else with my life. It’s been a roller coaster. But getting this bout is the biggest thing in my career, for sure, and I want to put on a show.”