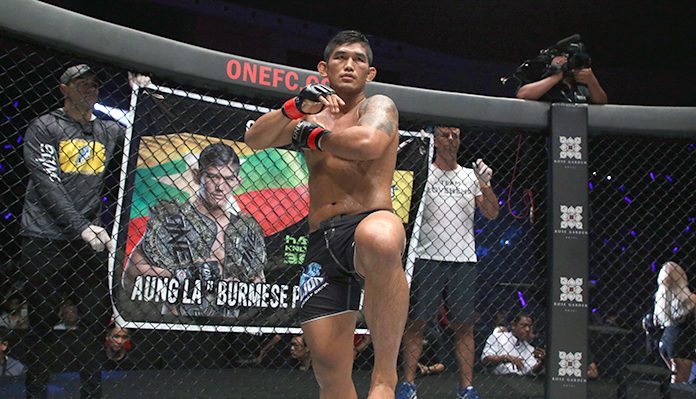 Even amid the ongoing coronavirus pandemic, the Burmese champion had faith that ONE Championship would find a way to get him back into the cage. That faith proved well-placed, as he’s closing in on an October 30 middleweight title defense against unbeaten Dutchman Reinier de Ridder.

It’ll be his first fight since November, 2019, when he defended his light heavyweight title with a knockout win over ONE heavyweight champ Brandon Vera.

“I knew I was going to fight some time this year,” Aung La told BJPENN.com from his home in South Florida. “I just thought it was going to be a little bit earlier, but more time is good. It gives me more time to prepare and get better.”

Heading into this fight, which will go down in ONE Championship’s headquarters of Singapore, Aung La gives his foe props for always finding a way to win—even in matchups that look tough for him on paper.

“He finds ways to win,” the champ said of De Ridder. “Every time I think ‘he’s going to have trouble with this guy because of his strengths,’ he’s proved me wrong.

“I thought he was going to lose [his last fight with Leandro Ataides], but he finds ways to win,” Aung La added. “You can’t underestimate that.”

While De Ridder has won fights with his striking previously, his best skill is undeniably his grappling. Aung La acknowledges his foe’s skills, and considers him a very worthy opponent, but believes his own training with the stars at Sanford MMA will have him well prepared for the Dutchman’s challenge.

“He’s 12-0 for a reason, so he’s definitely a good opponent for me,” Aung La added. “He does have good jiu jitsu, a decent ground game, but in terms of getting ready for him, he’s not going to surprise me. I’ve got great training partners like Derek Brunson. Brendan Allen just came down, Cezar ‘Mutante’… all these southpaw guys that are jiu jitsu black belts. So I don’t think he’s going to show me anything I haven’t seen.”

While Aung La is happy to give De Ridder props for his undefeated record, he also believes being unbeaten could be a disadvantage for the Dutchman, as he’s never experienced real adversity in the cage.

“As a 12-0, undefeated guy, you’re going to have a lot of confidence, but I’m going to put my fist in his face and that confidence is going to change.

“The confidence will go down as soon as I hit him.”

If Aung La is able to defeat De Ridder, his intention is to stick to the middleweight division for the time being, although he’s not opposed to defending his light heavyweight title again if the right challenger emerges.

“We’ll see what we have [at light heavyweight],” he added. “I’ll have to talk to my coaches.”

If Aung La does stick to the middleweight division for the time being, he’s likely to find himself in a trilogy fight with his chief rival Vitaly Bigdash sometime in the near future. The pair are tied 1-1 across two previous fights, and were briefly slated for a trilogy fight earlier this year until the coronavirus pandemic nixed the plan.

“Definitely the Bigdash trilogy will happen,” he said.

Before any potential light heavyweight title defenses or trilogy fights can happen, of course, Aung La N Sang will need to get by De Ridder.

He’s confident things will shake out in his favor in Singapore on the 30.

“My body feels the best it’s been in the last five years,” he said. “My strength and conditioning is on point. My wrestling’s gotten a lot better.