Sean Strickland didn’t know if he would make the walk to the ever Octagon again.

In the middle of December of 2018, Strickland was driving back from King MMA on his motorcycle when he was involved in a serious accident. The crash was not his fault, but he went unconscious and did not wake up until hours later. He also needed surgery and when he woke up, doctors told him his fighting career was likely over.

“Oh shit, the entire time through recovery I thought my career was over. The majority of doctors I saw when it happened actually told me it’s probably unlikely I’ll be able to fight again and I shouldn’t fight again. My career was over for a bit, I guess until the recovery went well,” Strickland said to BJPENN.com. “In my life, I’ve only been two things and it is a f**k-up and an MMA fighter. For the most part, I wasn’t ready to start working at Walmart. I have been training my whole life and at 27, 28 being told you won’t be able to fight again, that was hard. But, here I am.”

Strickland has a lengthy recovery and rehab process. At times, he didn’t know how his body would respond to training and sparring. 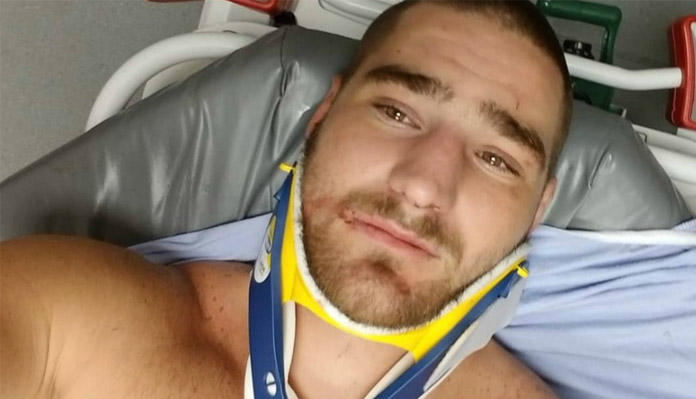 Yet, nearly two years after the accident, Strickland will make the walk to the Octagon again on Halloween night against Jack Marshman. The 29-year-old will also be moving up a weight class to middleweight.

“That was the big reason why I moved up to middleweight. I can make welterweight but it is not fun as I starve myself,” Strickland said. “So, I can make middleweight on really short notice, so I can take a lot of fights back-to-back and on short notice. It just came down to me wanting to fight more after my accident.”

Sean Strickland last fought back on October 27, 2018, where he beat Nordine Taleb by TKO. In his career, he admits he was focused too much on keeping a good record intact. He does hold a very solid record of 20-3 and his only losses have come at the hands of Santiago Ponzinibbio, Kamaru Usman, and Elizeu Zaleski dos Santos.

Yet, given Strickland didn’t even know if he would be able to fight again, he no longer cares about his record and is just focused on having entertaining fights for the fans.

“This is my life and I’m happy the UFC let me be on the roster for two years without fighting. So, I’m just trying to have some good wars now,” Strickland explained. “I’ve been trying to keep my record intact. At this point, win or lose, I just want good and fun fights. I want people to know I’m an exciting fighter.”

The first war will take place against Marshmn on Halloween night. Strickland knows he has a clear path to victory if he wrestles the Welsh fighter. Yet, he wants to stand and trade with Marshman and get a knockout in his return to the UFC.

“I don’t think I will wrestle this fight, it will be a boxing match. I like to stand and trade. If I take him down, it will probably be an easier fight but that is boring to me,” Strickland concluded. “I’m undefeated as a middleweight in my career, and at the end of the day, the UFC knows I’m down to scrap anyone after I hopefully knock this dude out.”

Do you think Sean Strickland will beat Jack Marshman at UFC Vegas 12?