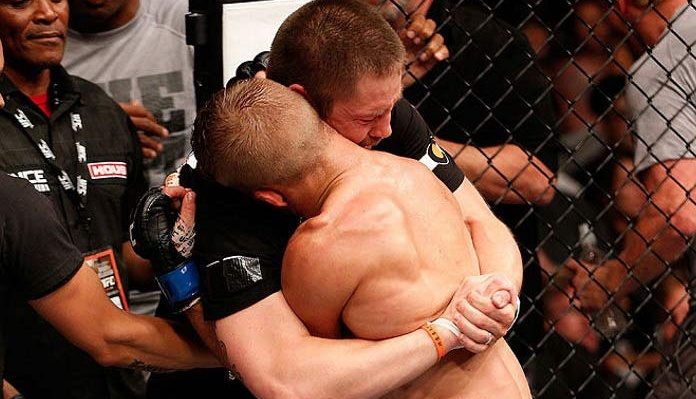 Mixed martial arts is a very complex sport. When broken down and the layers are peeled back, all techniques come from someone or something.

Every punch, every kick, every takedown… Anything that a coach has taught a fighter, that coach has been taught by their coach and so on. It then continues through the fighter and on and on.

Fighting is a physical form of math in a way. The combatant’s goals are to solve the problems that are coming at them in real time, answer by answer until the test is either failed or completed. And the way the problems can be answered have limitless options.

The same rule can be applied to mathematics as well as any form of teaching. Everything ever learned was learned by someone else before it was handed down. And MMA’s greatest example of that may be in the storied lineage behind current UFC bantamweight champion TJ Dillashaw.

This past Saturday, Dillashaw put a cap on his heated rivalry with former teammate Cody Garbrandt with yet another knockout victory. Only this time it came even earlier than it did before.

There and in the moment helping guide him each and every step of the way up to the finish was his coach and mentor, former UFC fighter himself, Duane ‘Bang’ Ludwig.

“It was awesome. there was just so much going on I wish I would’ve took an extra second to realize all that and not jump around so crazy,” Ludwig recollected when speaking with BJ Penn Radio, “It was special, you know because it’s literally martial art lineage. Bas [Rutten’s] system of understanding and me taking that and understanding that to the best of my ability and adding on, giving my flavor and sprinkles and sharing that with TJ and have him add sprinkles. It’s just compound interest of martial arts knowledge. Someone has to do it right? I mean, you see these TV shows and movies and this bullshit with a bunch of fake acrobatic kicks and stuff. We’re the real life Mister miyagi, cobra kai, karate kid. we’re the legit Master Splinter and Ninja turtles. we’re the ones out there doing it and living it. TJ is the real Bruce Lee.”

Having gone 21-14 in his pro MMA career, Ludwig studied under the tutelage of the great and legendary former UFC heavyweight champion Bas Rutten as he eluded to.

Known for his fantastic kickboxing skills as evidenced by his MMA career and kickboxing career and now teachings, Ludwig learned from one of the very best.

Despite what every angry high schooler full of angst and frustration wants to believe, a teacher does actually want its students to succeed. Because if they don’t then they too are the failures because they’re the ones who are contributing their knowledge.

And that in itself may be worse than failing yourself directly.

While teaching their own tricks, coaches are also creating and coming up with new ones too as Ludwig hints at.

Adaptation is a part of life and a needed ability in combat sports and mixed martial arts more in particular.

If everyone remained the same, fighters would become stagnant, excitement would dwindle, and things would be gone before they began. Things on the outside around will constantly continue to change which is why adapting is a necessity and discovering new tips and tricks is a must.

“That’s what the f*ck I do, is discover and develop martial arts. That’s what the f*ck I do, that’s what I dedicated my life to And my prime pupil is TJ. he’s the one who earned and deserves it, he’s all about it. So, let’s do it, let’s figure out, let’s evolve martial arts to a level where he can be as successful as he can be, and it’s proven to be f*ckin’ pretty sweet. Well, there’s a gym where you work out at, there’s an academy where you learn, there’s a dojo where you find your way.

So that building is one of or all three, depending on what you’re there to do and I’m there to find my way and TJ’s way, the way of martial arts, it’s a dojo. We’re there to discover and develop martial arts. It’s literally a martial art laboratory. And so is my place, wherever TJ and I are, we’re a traveling martial art laboratory at its highest level. It’s like Pinky and The Brain. What are we trying to do today? The same thing we do every day, not trying but take over the world.“

You can’t have science without a little math which Ludwig greatly understands.

Life is about survival, life is about struggle and life is about challenge. Every day, people are fighting through and for these things trying to strive to be better. Which is why the history of it all is so important.

You have to build up to become the best, it’s not an overnight process. And every wall that gets ran into only aids the contributions.

“That’s what a sensei does. Sensei means history teacher, from those who have come before us,” Ludwig continued. “I’ve taken the positive lessons from Bas and myself and I’m paying it forward. That’s what we all should be doing is paying it forward. That’s how we all progress. It’s all a part of survival. Every human endeavor, Everything that we study we push the pace on it. Cars, technology, phones, computers, we try to find the best and fastest thing to do, that’s me and martial arts. TJ is my computer, he’s my car, he’s my race vehicle. I’m fine tuning him to see how well a human can compete in martial arts, finding the most optimal way, with an actual fight, under the UFC rules, who will survive. It would be TJ. This is what the f*ck I do.

I’m 100 percent in. I’m lucky the UFC’s here and that we have a strong and stable economy in the U.S. and the world to give me the platform to study martial arts, right? If we were in a civil war right now, nobody is going to a f*cking academy to train. I’m glad that we live in a stable society. I think about this from many aspects, obviously, So I’m thankful for a lot of things. I’m very thankful for TJ, the UFC. I’m thankful for [Dominick] Cruz, for being a rival opponent and someone to game plan against and to learn and grow. I’m thankful for Cody, I’m thankful for all of this. I’m thankful for you [BJPENN.COM] for allowing me to break this down articulately and verbally and to share this. To listen to myself also and hopefully learn and teach and grow. TO share this and help people become better. Be thankful, Right? Don’t hate on people.”

There are a variety of ways for one to achieve their goal, whatever it may be and very rarely will it be done alone. Sometimes stumbling first is required to get up and take that big next step.

As Ludwig believes, his star pupil in Dillashaw was destined to be a world champion with or without him. Regardless, one thing is undeniable, they found each other and have brought the best out of each other since which continues to bring them to new heights in a never-ending game of primal evolution.

“You know what TJ’s challenge is? TJ, Himself. That’s the challenge for all of us, ourselves. So mastering, he’s learning to master himself, so I’m telling you, man, we’re onto something great with TJ. He’s a very rare human being, he really is. There’s a lot more to this guy than people know. He’s a very special guy, he’s a champion. They’re born, they’re not created, they’re extracted, right? I didn’t create TJ, I just helped discover him.

A fighter’s skillset can kind of be looked at as a tree. Where did their roots come from? Who watered them into the evergreen that they became in their prime?

It’s all traced back to someone and for that, each and every fighter carrys their own special lineage.