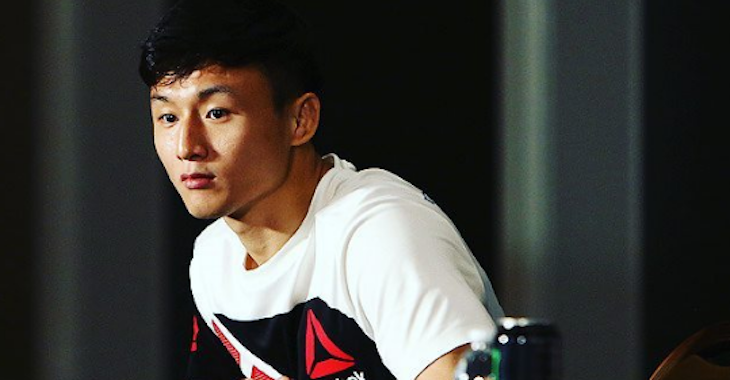 On January 14, in the main event of the UFC’s anticipated stop on St. Louis, MO, South Korean featherweight contender Doo Ho Choi will return to the cage for the first time since his insane 2016 loss to Cub Swanson. His opponent in this long-awaited comeback fight will be a fellow knockout artist in Jeremy Stephens.

Should Choi win this fight with Stephens, he’ll vault up the UFC featherweight rankings in the direction of a title shot. And while he’ll likely need another few wins beyond Stephens to secure that shot, he’s hoping it’ll happen soon – before he’s forced to complete the two years of mandatory military service required of all South Korean men.

Choi discussed this inevitable two-year hiatus from mixed martial arts during a press event over the weekend.

“I feel that during that time I’m in the military, I’m still going to be working on my fighting career,” Choi said through an interpreter (via MMAJunkie.com). “So I’ll just become an even greater fighter, in my opinion.”

“I want to have a title shot,” he added, sharing his hopes for a title shot before this military service begins.

Choi also discussed his upcoming bout with Stephens. Apparently, Stephens has been on his radar for awhile.

“I knew he’s a scrappy fighter, as well, and (has) powerful punches,” Choi said. “And he has a good game plan. So I knew if we were to ever compete together – and then when I was presented this match, we would put on a good fight.”

Though time might not be on his side – he expects he has “at least another year” before his service begins – Choi is not panicked about squeezing in a title shot before his hiatus.

“I don’t really feel stressed or pressured at all,” he said. “I just enjoy what I do. And I’m just going to take one fight at a time. But then my goal is to get a title shot.”

Do you think Doo Ho Choi will return to the win column with a defeat of Jeremy Stephens on the 14th?