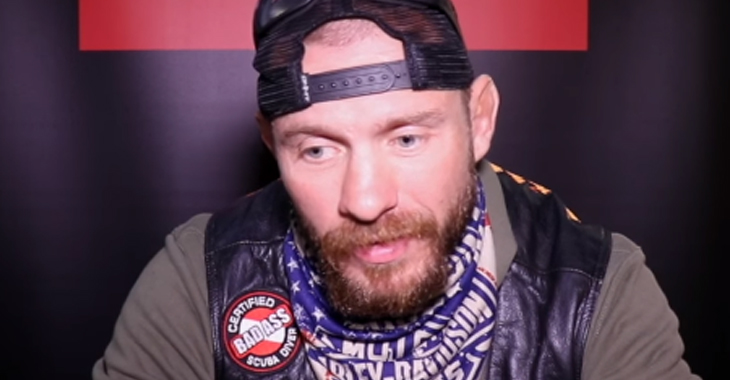 Donald Cerrone is in a spot he’s never been before. He’s on a three-fight losing streak going into his fight with Yancy Medeiros this Sunday. Something like will make a man think, which is something the Cowboy has clearly done. In Austin, he’ll make his 35th walk to the cage under the ZUFFA banner from his UFC and WEC fights combined. Imagine all those fight ghosts hollering in your brain. Imagine the feelings compounded by every single one of those weeks, days, hours and minutes leading up to them. In his latest interview, Donald Cerrone lets you walk a mile in his boots by describing what this feels like.

“This is a must win for me just because I’m sick and tired of f-cking losing, man. It has nothing to do with setting some record or getting back on track or proving anybody wrong. Just it’s f-cking time. Let’s go. Give a sh-t about keeping my job, or give a sh-t about making a statement to the guys in the upper weight class. Let’s go Cowboy. It’s time to f-cking pony up, b-tch. That’s what this is about. It’s about me and having fun. This is what I love. It’s the scariest, most intense fun feeling. I can’t even explain it to you but, from right now: Can’t sleep at night. Eating is hard. Make the weight. Half the battle is over. Fight day, f-ck. All your friends are like, ‘You’re gonna kill him!’ Uh, no b-tch. I gotta go in there and fight. It doesn’t just go like that.”

Everything is BIGGER in Texas.

“Scared. Let’s go. Pack your sh-t. We’re in the arena. All your teammates are fighting, your coaches are there. It’s crazy, it’s scary. You go throw up in the bathroom, I do anyways. Then you walk down the hall, f-cking lights in your face just like this. Now you’re live on TV walking down a tunnel and you’re like, ‘Holy sh-t. Six weeks and it’s here. And it’s now.’ I’ve been on the edge of a plane about to jump out, I’ve been on top of mountains and nothing puts that f-cking hair on the back of my neck feeling like walking in that f-cking Octagon and they shut that door and you’re like, ‘Welp, there’s only two ways this could go right? In or out.’ The old WEC kickin’ ass Cowboy is back and I feel it, and I’m hungry again, and I’m looking for that feeling, man.” — Donald ‘Cowboy’ Cerrone speaking to MMA Junkie.

If Donald Cerrone wins against Yancy Medeiros, he’ll tie the record for the most wins in UFC history. But as he said, it’s not even about that. It’s about that feeling. That rush. That adrenaline. That fear that can make you vomit. The electricity that can scare you to the point where you look back at that fear and accept it… then Cowboy up and beckon it to come and get some. UFC Austin goes down on Sunday and we’ll all be looking for that Cerrone.