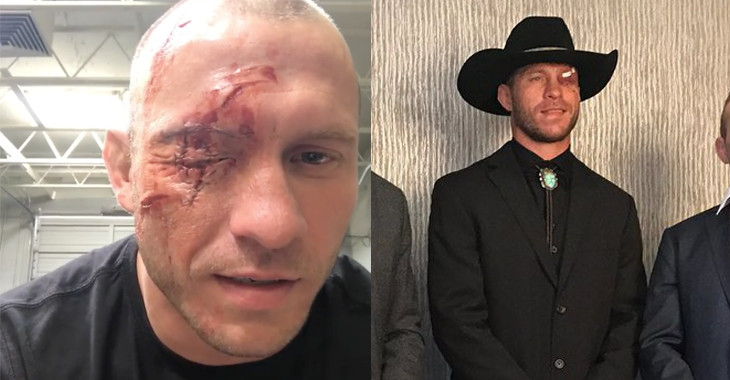 UFC fan favorite Donald “Cowboy” Cerrone caught a lot of people’s attention with his injury that he claims was from a real accident.

Just weeks away from his fight against Matt Brown at UFC 206 taking place in Toronto, Canada, Cerrone posted a video of a gruesomely injured eye. Cerrone explained to MMA Fighting’s Ariel Helwani at a UFC 206 media interview that he doctored his actual injury up just to get some attention. Cerrone then went on to say that he embellished the injury just so the media could use it and run with it, to which his plans worked out well as fans all had their opinion on what they thought actually happened, or did not happen.

“So the eye is legit. Nothing happened to my eye. They were all superficial, it was just branches cutting,” Cerrone said. “I have like a cut here left [on his eyebrow]. Can barely see it in there.”

Cerrone’s eye was also black and blue from the accident and says it got worse from a little sparring session with Joe Schilling. Interestingly, Cerrone says he is in the middle of filming two movies and actually had to spend hours doing makeup to cover up his black and blue eye, which was the complete opposite of what many fans believed was makeup for a movie.

With Cerrone’s successful attention-grabbing antics, it has surely caught more eyes for his upcoming fight this weekend.

Donald Cerrone takes on Matt Brown at UFC 206 at the Air Canada Centre in Toronto on December 10. Who are you picking to win the exciting welterweight matchup? Sound off in the comment section!