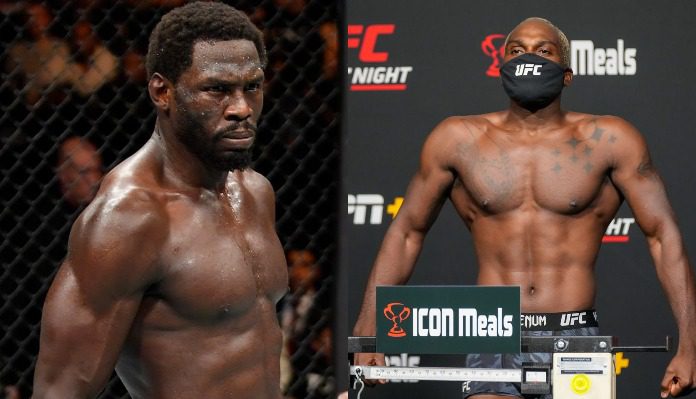 Brunson (23-8 MMA) had entered the contest sporting a five-fight winning streak, his latest being a submission victory over Darren Till. The 38-year-old’s last loss came against reigning middleweight champion Israel Adesanya in November of 2018.

Meanwhile, Jared Cannonier (15-5 MMA) had gone 4-1 over his last five Octagon appearances ahead of tonight’s UFC 271 event. ‘The Killa Gorilla’ had last competed in August of 2021, where he defeated Kelvin Gastelum by way of decision.

Tonight’s Cannonier vs. Brunson contest proved to be the story of two rounds. ‘Blonde Brunson’ nearly scored a finish in round one after knocking down ‘The Killa Gorilla’ and locking in a rear-naked choke. However, the horn sounded seconds after securing the submission and thus we went to round two. In the second frame Jared Cannonier was able to land a nasty standing elbow that had Derek Brunson in all sorts of trouble. From there he proceeded to put Derek unconscious with some brutal elbows on the ground.

Check out how the pros reacted to ‘Brunson vs. Cannonier’ below:

Blonde Brunson for the W

Big win for JC. Takes out a gritty Brunson who has improved a lot of the years. He’s had a great run to get into title contention, at 37 years old, but it was Jared’s night. That power is undeniable! #UFC271

Blonde brunson just got defeated. Still the man though. #UFC271

Wonder if Brunson had adrenaline dump thinking he was going to finish.

Who would you like to see Jared Cannonier fight next following his KO victory over Derek Brunson at tonight’s UFC 271 event Houston? Share your thoughts in the comment section PENN Nation!