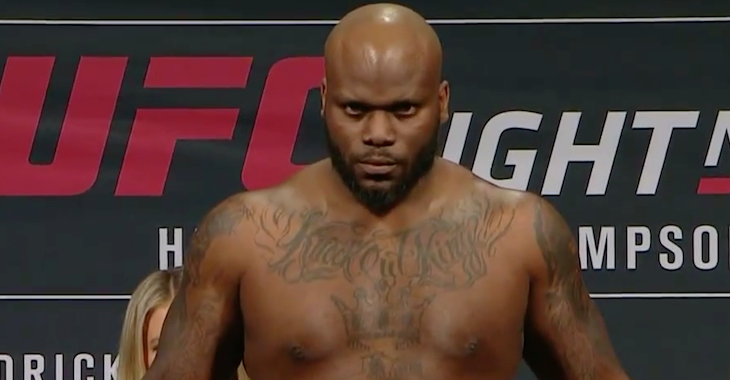 Derrick Lewis remembers the exact moment when he discovered that not only was his fight with Marcin Tybura was off, but the entire UFC: Manila card had been cancelled as well.

‘The Black Beast’ discussed flying out to the Philippines and cutting weight before hearing the event was cancelled:

“I had to cut 30 pounds, I was really suffering man,” Lewis said on Monday’s edition of the MMA Hour.

“They woke me up from my sleep and I had like five missed calls from my manager saying he had bad news. I thought my opponent got hurt or something like that. He broke it to me that the whole card got cancelled, and I was just pissed.” “I asked, are they still gonna pay me? He said he didn’t know, we will talk about it this week. I said, ain’t gonna be no talking about it this week. Let me call Dana White or somebody to pay me, because I already don’t like flying so if you’re gonna fly me over here at least pay me.”

Lewis (16-4) most recently scored the biggest win of his career after taking a split decision victory over Roy ‘Big Country’ Nelson in July. ‘The Black Beast’ is currently riding an impressive four fight win streak, with three of those victories coming by way of knockout.

No word yet on who and when ‘The Black Beast’ will fight next. How do you feel about the cards cancellation? Who do you think should be Lewis’ next opponent? Sound off, PENN Nation!