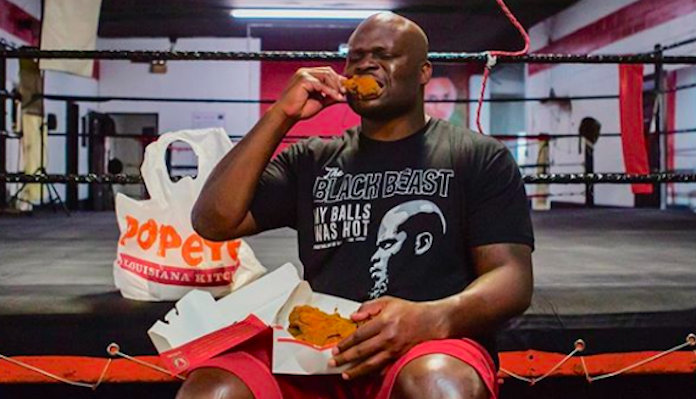 Derrick Lewis is no stranger to dropping some classic lines when he has a mic in his hand. The UFC 265 presser was no different.

When asked by a journalist, “Derrick, how it would feel to get beat by a Frenchman in front of your fans?”

To which the reporter replied,

“We’ll remember that on Saturday night.”

Not missing a beat, Lewis responded by saying,

Lewis and his unique brand of humour has often resonated with fans. Not only has he put together some memorable post-fight interviews, but he also has one of the most popular instagram accounts in the UFC with more than 2 million followers.

With the interim heavyweight title will be on the line this weekend at UFC 265, the Texan heads into the biggest fight of his career.

Many have questioned the rationale behind putting a belt up for grabs with champion, Francis Ngannou having won the strap as recently as March. The Cameroonian sealed it in memorable fashion with a second round knockout against Stipe Miocic at UFC 260.

However, when ‘the Predator’ said he wouldn’t be able defend the title at UFC 265, Dana White intervened to make this interim title match-up.

It’s fair to say that Lewis has earned his shot. ‘The Black Beast’ has put together an impressive four-fight winning streak. That run includes back-to-back second round knockouts against Aleksi Oleinik and Curtis Blaydes in his last two encounters.

He also, quite infamously, managed to notch a win over Ngannou at UFC 226 back in 2018.

Meanwhile, it’s taken Gane just two years to work his way from total newcomer to title contender. All the signs suggest that ‘Bon Gamin’ is a new breed of heavyweight. Light on his feet with excellent movement, the 31 year-old is a huge talent. He’s racked up six straight victories since arriving in the Octagon to take his unblemished record to 9-0.

The stage is set for an epic fight, but the question remains…Will Lewis be able to tell us what it’s like to lose to a Frenchman come Saturday night?