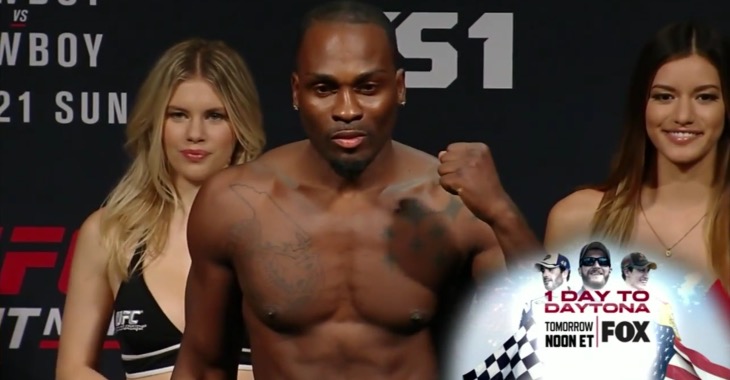 On Saturday night, the UFC took over the small border town of Hidalgo Texas with UFC Fight Night 94.

In the main event of the evening, Michael Johnson dazzled with a first-round knockout of streaking contender Dustin Poirier. In the night’s co-main event, rising middleweight Derek Brunson scored a similarly emphatic win, leveling the hot-and-cold Uriah Hall with a thudding left hand against the cage. The end occurred at the 1:41 mark of the first round, making the co-main event just 6 seconds longer than the main event.

Brunson’s TKO win marks the end of several months of trash talk with Hall, throughout which the two middleweights accused each other of everything from performance enhancing drug use to “weak-mindedness.”

Here’s how the MMA community reacted to the loss, offering up commentary on Brunson’s newfound punching power, and the fact that referee Herb Dean might have forced the stoppage a little bit earlier than necessary.

Hahahaha I don't even need to respond to certain people when they talk shit.

DB with the power 👊🏽💥 #UFCHildalgo

It's tough being a ref. But @DerekBrunson has Power ! #UFCHildalgo

BAD stoppage gotta give the guy a chance

Takes forever to call it when someone is asleep but going to stop that so quick. No sense.

Oh Herb Dean I don't know about that.

Where there's a grey area I'm ok with Ref's erring on the side of less brain trauma, not more.

Brunson’s TKO win over Hall is his fourth strike-induced stoppage in a row. This streak ties him with UFC heavyweight champion Stipe Miocic and Dagestan’s Mairbek Taisumov for the longest active knockout streak in the UFC. His win streak, meanwhile, now sits at 5 which is the second best in the middleweight division, behind Yoel Romero’s 7. The 32-year-old middleweight now sits at a strong 16-3 overall.

Hall, on the other hand, falls onto a two-fight skid, having given up a decision to Robert Whittaker in his second most recent bout. His career-best knockout of Gegard Mousasi is quickly vanishing in the rear-view. Though he was once referred to as a championship fighter by Chael Sonnen, Hall is now a tough 12-7 overall.

Were you impressed by Brunson’s abrupt finish of Hall, or did you think the referee intervened too early? Who do you want to see the streaking middleweight fight next? Sound off, PENN nation!