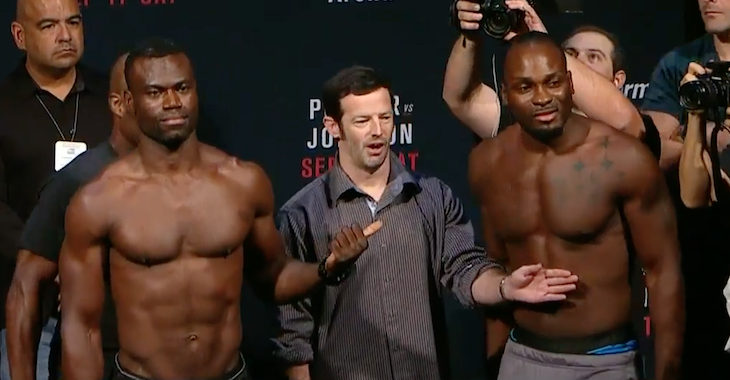 Last Saturday, in the co-main event of the UFC’s debut in Hidalgo, Texas, streaking middleweight Derek Brunson scored an abrupt TKO win over the once-hyped Uriah Hall. Yet while this victory was undeniably impressive, many fans and pundits were quick to question the stoppage itself, as Hall seemed to be intelligently defending himself, and none of Brunson’s followup ground-strikes appeared to land.

On Monday’s episode of The MMA Hour, Brunson gave his take on the stoppage. Though he believed it was fair, he said that, in the end, it doesn’t really matter to him.

“Man, honestly, it doesn’t matter,” Brunson told host Ariel Helwani. “I don’t really care if it’s an early stoppage, late stoppage. I guess if I’m on the opposite end, and let’s say someone dropped me, I guess I would want time to recover. It goes both ways, but as a fighter, you know [if a stoppage was good]. Uriah Hall hasn’t said anything, he hasn’t posted on social media, he hasn’t said anything, cause as a fighter, you know you can’t get caught in those positions. It’s martial arts. It’s about protecting yourself.”

Though Brunson admitted he expected referee Herb Dean to give Hall a little more time to recover, he also assures that, as far as he could tell, his opponent had been knocked out.

“Uriah got hit with a big left hand and he was down,” he said. “The only thing that woke him up, per se, is him hitting the canvas. He dropped, he was out, he was limp.”

“I followed up, I grazed his chin, and I grazed his head, and just looked at him and he was pretty out. Then Herb Dean stepped in the middle, and I was like ‘what are you doin’ Herb?’ I thought he was going to get more time, so I was gonna posture up and keep punching. But in my opinion, that was a great stoppage cause he was limp, he was out and the fans don’t see every angle.” Finally, Brunson explained that, because Hall has not experienced many knockouts in his career, he’s able to recover from them faster. This, Brunson elaborated, could be why it looked like he still was able to continue.

“Uriah Hall hasn’t been knocked out [a lot], so his chin is relatively good, so he can recover faster,” Brunson said. “So he goes out, comes back, and it looks like he was never out. But if he keeps taking those kinds of punches, he would just be out, out. So, he was definitely out, I saw it first hand.”

Whether the stoppage was early or not, the win gave Brunson another big push up the middleweight ladder. He’s now riding five straight wins – and the four most recent of those wins have been first-round knockouts.

Who do you want to see Brunson take on next? Sound off, PENN nation!