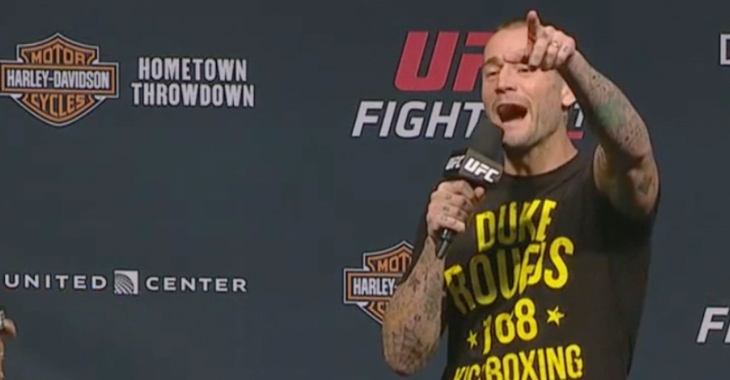 Earlier this month, on the main card of UFC 203, CM Punk’s long journey into the world of mixed martial arts came to an abrupt and violent end. Though his heart was on full display in his long-awaited fight with Mickey Gall, his skill deficit was too, as he surrendered to a rear-naked choke less than two minutes into the affair.

Given the way Punk’s jump to MMA unfolded, the consensus seems to be that he should not take another fight – at least, not in the UFC.

Though Punk’s UFC debut was a massive financial success, this is the opinion of UFC President Dana White. It’s also the opinion Punk’s pro wrestling peer Bill Goldberg, who recently weighed in on the whole affair on Submission Radio.

“There’s no question he should not fight in the UFC,” Goldberg said. “That would be blasphemy. It would be a slap in the face to all the guys who work their asses off to make it to prelims on Fox, on undercards and on the main event card.”

“At the end of the day, from a promoter’s standpoint, from a competitor’s standpoint, from his standpoint, there’s no logic to him stepping in that Octagon again,” Goldberg continued. “If he still has the passion for it and wants to train and compete, then yeah, lower-level shows are where he needs to be.”

If CM Punk is sent packing by the UFC, as Goldberg believes will be the case, there seems to be a real chance that he’ll be scooped up by the opportunistic folks over at Bellator. At least, that’s what Bellator light heavyweight Muhammed “King Mo” Lawal seems to think.

Outside of the UFC and Bellator, however, there likely aren’t any other MMA organizations that can afford the former pro wrestling star.

Having spoiled Punk’s debut, the 24-year-old Mickey Gall now has his sights set on a battle with fellow prospect “Super” Sage Northcutt. The pair are expected to meet at welterweight sometime in December.

Do you think CM Punk should be given another shot in the UFC’s Octagon, or should the UFC heed Goldberg’s advice and send him to a lower-level organization?

Sound off in the comments, PENN nation!