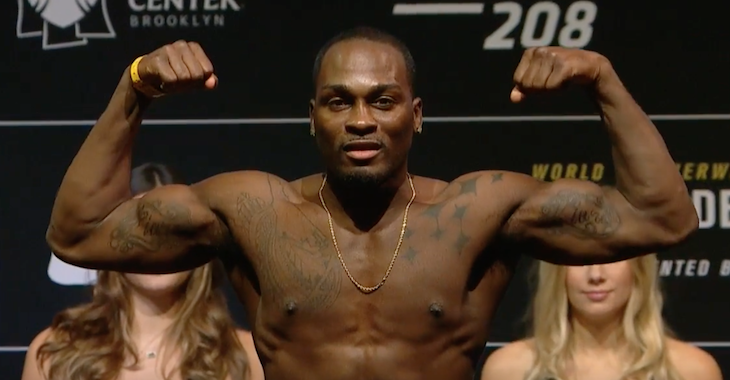 After three-rounds of action the Silva vs. Brunson fight went to the judges scorecards for a decision.

To the surprise of many fans and analysts, Anderson Silva was awarded the unanimous decision victory with one judge scoring Silva all three-rounds (30-27).

Shortly after the event, Derek Brunson took to his FACEBOOK page where he issued the following statement:

“Wow unreal I put my heart & soul out there on 3 weeks notice only to get it taken from me. I just outclassed the greatest of all time #UFC208”

Brunson appeared to land a higher volume of strikes throughout the contest, but it was Silva who ultimately left Brooklyn with a much needed win.

Derek Brunson continued to poke fun at the judges from his official Twitter account later that evening.

I knew it smh… #UFC208 pic.twitter.com/TXopY8yRLI

Brunson did show Silva some respect this morning with the following tweet.

Must respect @SpiderAnderson thanks 4 the fight.It was an honor.I disagree w/ the judges but you're still my fav. of all time! @ufc #UFC208

How did you score the Silva vs. Brunson fight? Sound off PENN Nation!

Get the full Silva vs. Brunson fight recap below:

Round one begins and Silva takes the center of the octagon. Brunson comes forward and lands a leg kick. He circles out and then lands another leg kick. Silva comes forward and lands a left hand. Brunson leaps in with a right but Silva counters with a left. Derek with an inside leg kick. Anderson charges forward and throws a combination. Brunson ducks under and shoots in for a takedown. He presses Silva against the fence. Anderson breaks free and circles out. The fighters trade punches in the center of the cage. Brunson shoots in for a takedown but it is not there. Derek lands a left and then a right in the clinch. The fighters break and Brunson misses with a front kick. Derek circles and lands a leg kick. He lands another hard kick to the outside of Anderson’s leg. Silva pressing forward now. He lands a kick to the body and then throws a wheel kick. Brunson lands an uppercut and then another. Silva attempts a flying knee that misses. He falls down and Brunson drops in to his guard as round one comes to an end.

Round two begins and Silva presses forward early. Brunson shoots in but Silva defends the takedown attempt. Silva throws a knee that just misses. Brunson fires back with a leg kick. Another kick from Derek but Silva counters with a right hand. Derek comes forward and lands a nice left. Silva responds with a jab. Silva with a spinning back fist and then a body kick. Derek shoots in and scores a takedown. Silva quickly gets back to his feet but Derek has him pressed against the cage. Silva breaks free and lands an elbow. Derek shoots in for a double leg but it is not there. Silva shakes him off. Brunson fires off a leg kick. Silva lands a right hand and then a leg kick. Brunson circles out. Silva is dancing now. Derek lands a leg kick but Anderson responds with a jab. Good pressure from Anderson to close out round two.

Round three begins and Brunson lands a left and then misses with a right. He attempts a high kick but Anderson gets out of the way. Derek shoots in and briefly drags Anderson down to the floor. Silva quickly back up and lands a jab. Derek shoots in for a takedown but it is stuffed. The fighters battle in the clinch along the cage. They break and Silva lands a crisp jab. Brunson comes forward and lands a left. The fighters clinch and Derek lands a knee and then a right. Silva with a kick but Derek lands a right. They clinch and Brunson lands multiple uppercuts. Both fighters miss with front kicks. Brunson lands a left and then a leg kick. Silva scores a hard leg kick. Brunson returns fire with one of his own. Derek moves in and scores a takedown. 90 seconds remain. Brunson working from full guard here. He lands an elbow. Silva is defending well here. Anderson lands a nice shot from the bottom. Brunson returns fire with a left and then a right. Round three comes to an end.