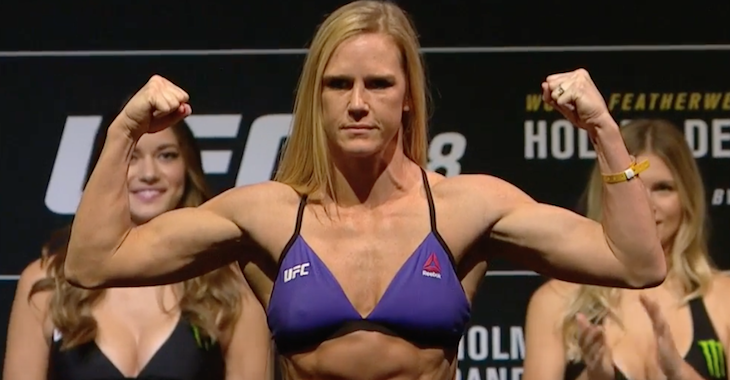 “The Preachers Daughter” went toe-to-toe with Germaine de Randamie for the UFC’s inaugural women’s featherweight championship in last night’s main event but after 25 minutes was on the wrong end of a 48-47 decision from the judges.

On two separate occasions during her title fight with “GDR”, at the end of rounds two and three, Holm was hit after the horn had sounded to stop the action.

Holly had this to say about the illegal shots:

“A lot of times, the first one they give a warning, that’s kind of normal,” Holm said. “I wouldn’t expect them to take a point after the first one, even though it was intentional. The second time, at that point you think they’d do something.” Holm believes that the late shots thrown by de Randamie were in fact intentional.

“It wasn’t like the last punch of a combination after the bell rang,” Holm said. “It was intentional and it was after the bell. What can you do?”

“I think it merits a rematch,” Holm said. “When you have more than half the people saying the fight should go the other way, that warrants a rematch, so, that would be awesome.”

Would you like to see a rematch between Holm and de Randamie put together by UFC officials? Sound off PENN Nation!