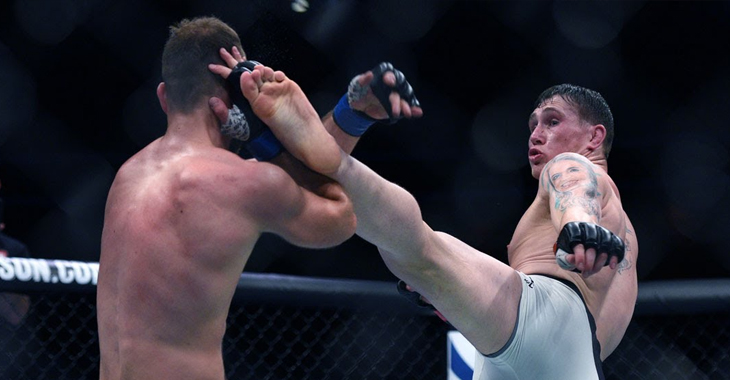 Darren Till has still been running hot after his first-round finish over Donald ‘Cowboy’ Cerrone back at UFC Gdansk. The only problem is that the surging welterweight can’t capitalize on it because he’s been unable to get a fight. He’s called out nearly the entire division, but not one has signed on the dotted line yet for one reason or another. Moving into 2018, the Scouser is obviously frustrated and took to Twitter to vent. Kickboxing legend John Wayne Parr saw his post and took time out to show some respect to the young UFC fighter.

“This why you sir are the man, Darren Till. I’ve been fighting for 30 years and this is also my philosophy. Fight anyone and everyone, then no one can question your legacy. Sure it would be great to have the nice house, cars and money, but when I pass no one will remember the luxuries I owned. For me personally, I want people to remember that I won some, I lost some, but the main thing is I fought everyone. How do I want to be remembered? [As a] warrior!” — John Wayne Parr via Twitter.

Thanks man… legacy is everything!!!!

Darren Till was quick to send a statement of respect in return. John Wayne Parr is a 10-time muay thai champion while fighting around the world and back again. The man is 41-years young, on a six-fight win streak and just earned a TKO at Bellator’s latest kickboxing card. Basically, his accolades can’t fit within the confines of this small article. If you’re not familiar with Parr, get out there and search him out. His documentary ‘Blessed With Venom’ is a great start and is included in its entirety below.