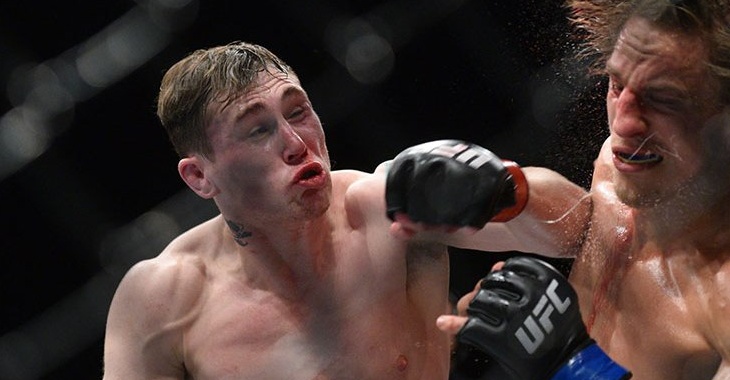 The unbeaten Brit, Darren Till became an overnight star with his huge first-round victory over Donald “Cowboy” Cerrone back in October. Since then, Till has vaulted into the Welterweight top 10 and let it be known that he’s not going anywhere anytime soon. Till just being the young age of 24 and already as talented as he is, there’s no reason to disagree with him.

There’s one man in particular who Till has his eye on though. Right after his win over Cerrone it was Mike Perry who recently lost this past weekend to Santiago Ponzinibbio. Because of that, Till isn’t looking so much to get this fight anymore but would still be welcome to the chance to throw down with “Platinum”. Till instead focuses his attention to the man he was rumored to fight in the UFC London main event, former two-time title challenger, Stephen “Wonderboy” Thompson.

Till was on today’s episode of the MMA Hour and had this to say:

“His Daddy won’t let him,” he replied when asked if he thought the Thompson fight would be scheduled.

“I don’t know why Thompson won’t take the fight. Maybe I have jumped a few spots, but so what? If I am whatever they say I am, why won’t he just fight me and knock me off my perch? If they think I don’t deserve it then come and show me that I don’t deserve it because I know I do. He’s looking for the title again, but he’s been beat twice. Now he’s moved onto RDA. He knows he’s going to beat RDA because I feel Wonderboy could really hurt RDA.

Me and him could make a great fight – I’ve got a chin and he’s got a chin. I know I can knock him out. I know for a fact that I could knock him out if I fought him.

It’s because he’s a world-class striker. That’s why I want to fight him. His striking ability is so good. I know with me coming from a Muay Thai background and him coming from karate, I can nullify everything he’s does and prove that I am the most superior striker in all the UFC. I know that.”

Wonderboy Thompson last fought at the epic UFC 217 event in November, where he defeated Jorge Masvidal by way of unanimous decision.