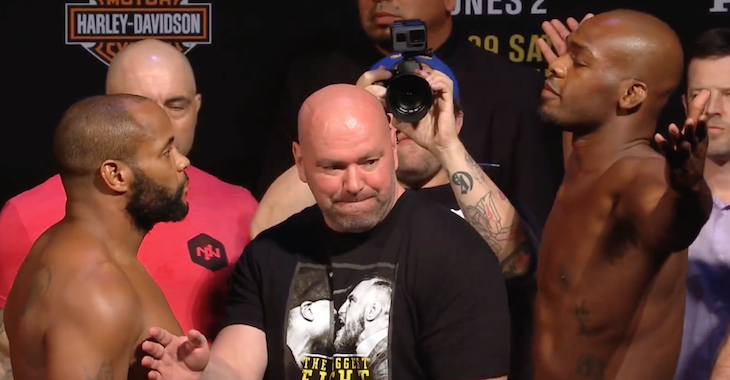 It is arguably the most heated rivalry in mixed martial arts history. UFC light heavyweight fighters Daniel Cormier and Jon Jones simply do not like each other.

The pair first met at UFC 182 in January of 2015 in Las Vegas. Daniel Cormier entered that contest as the undefeated challenger to Jon Jones UFC light heavyweight title.

The fight was closely contested but after twenty-five minutes of back and forth action it was clear that Jon Jones had done enough to earn his eighth straight title defense.

The setback marked the first loss of Daniel Cormier’s storied mixed martial arts career but another crack at UFC gold was awaiting around the corner for “DC”.

Shortly after the conclusion of UFC 182, Jon Jones was stripped of his UFC light heavyweight title after violating the promotions code of conduct policy.

That opened the door for Cormier to have a second chance at UFC light heavyweight gold. “DC” made good on the opportunity when he squared off with feared knockout artist Anthony Johnson at UFC 187 and captured the promotions vacant 205-pound strap by scoring a third-round submission victory over “Rumble”.

Cormier would go on to defend his title against Alexander Gustafsson at UFC 192 and then once again against Anthony Johnson at UFC 210 before eventually getting scheduled for his highly anticipated rematch with bitter rival Jon Jones.

After two very competitive opening rounds, Jon Jones was able to land a head kick on Cormier in round three which had “DC” in all sorts of trouble. “Bones” would pounce on his wounded opponent and unload some brutal ground and pound which forced the referee to step in and call stop to the action.

Unfortunately, the UFC 214 main event fight between Jones and Cormier was eventually ruled a no-contest this after “Bones” tested positive for banned substances.

With that said, Cormier was later reinstated as UFC light heavyweight champion by the promotion.

“DC” has since defended his title on one occasion defeating Volkan Oezdemir via second-round TKO at UFC 220 in Boston.

Cormier, who is slated to challenge Stipe Miocic for the promotions heavyweight title at UFC 226 this July, recently told MMAFighting “I still feel I can win against Jon Jones”.

That statement prompted the following response/challenge from the former champion Jones.

Come get me baby https://t.co/c0XYGfHprb

Do you think Daniel Cormier could defeat Jon Jones in a trilogy bout? Sound off PENN Nation!