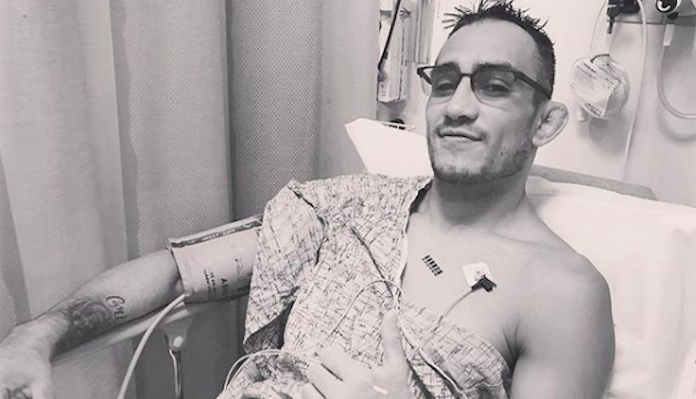 Unfortunately for fight fans, who have literally been waiting years to see the “El Cucuy” vs. “The Eagle” fight happen, the highly anticipated bout was once again cancelled at the last minute – this time due to a freak injury suffered by Ferguson.

UFC 223 marked the fourth time in history that a proposed bout between Ferguson and Nurmagomedov has failed to come to fruition.

Khabib would go on to face Al Iaquinta in the main event of UFC 223, a fight “The Eagle” won via unanimous decision.

With the victory, Khabib was crowned the UFC’s undisputed UFC lightweight champion, meaning the previous 155-pound belts held by Conor McGregor and Tony Ferguson were no longer of any value.

Tony Ferguson was not at all happy about the promotions decision to strip him of his newly acquired UFC interim lightweight title, but “El Cucuy” is not dwelling on things he can’t control and is instead focused on making a speedy recovery.

The former UFC interim lightweight champion, who is currently riding a ten-fight win streak, took to social media where he shared the following post surgery photos of his leg.