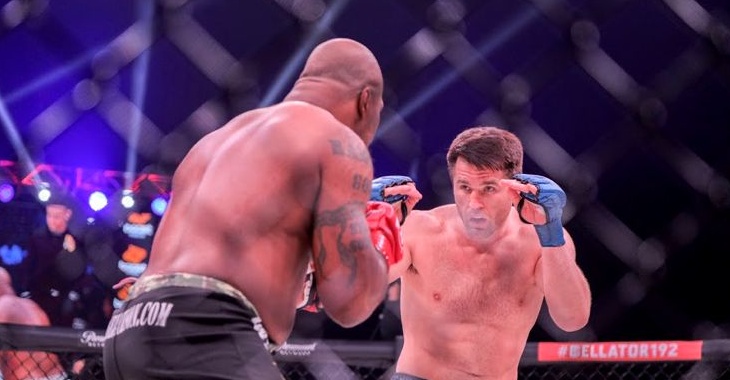 Cormier’s last appearance was at UFC 220 on January 20th when he defeated Volkan Oezdemir by second-round TKO to retain his Light Heavyweight title. On that same night, Bellator hosted an event of their own. In the main event, they kicked off the first fight of their Heavyweight Grand Prix with former UFC Light Heavyweight champion, Quinton “Rampage” Jackson and fellow former UFC star, Chael Sonnen. DC expressed his happiness for his friend and GP participant when speaking to MMAJunkie recently:

“It’s very impressive, I’m excited. I’m happy for Chael… He texted me telling me congratulations for beating [Volkan] Oezdemir, and I go, ‘No, bud, after what you did last weekend, this warrants a telephone call. So me and Chael talked for thirty minutes because I’m so happy and proud of him for going out there and getting the job done. And Rampage looked big. Rampage, in the pictures, he looked super in-shape, and in the fight he just looked massive. I was like, ‘Wow, this dude’s big.’ Chael went out there and did his thing. I’m so happy for Chael, he deserves to win.”

Cormier also commented on one of the other fights in the opening round of the tournament that includes one of his teammates and former Strikeforce champions, Muhammad “King Mo” Lawal:

“I want Mo to go out there and really take it to Ryan Bader,” Cormier said. “I wish they could make that for the title, though. Why can’t they just make that, inside their tournament, for the Light Heavyweight championship?”

The UFC champ makes a great point as Bader is the Light Heavyweight champion of Bellator and King Mo primarily fights in the division as well.

For Cormier, it was recently announced that his next fight will be one of the biggest in MMA history. He’ll be going back up to his old stomping grounds of Heavyweight to take on the record holding champion for title defenses, Stipe Miocic. The super fight will take place this Summer on July 7th at UFC 226 in Las Vegas.