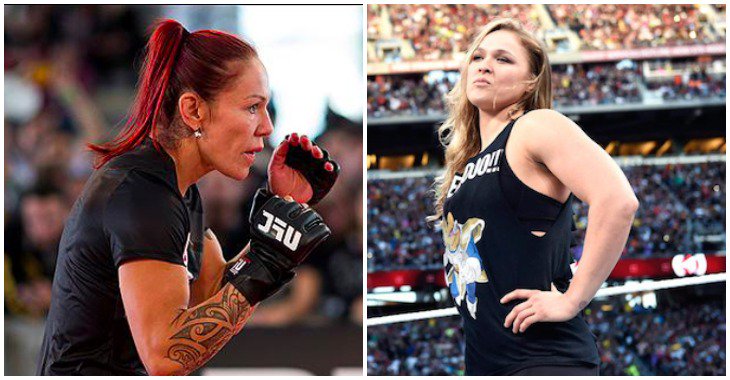 If there’s one female super fight that had fans intrigued more than any possible other, it was always Featherweight world champion, Cris Cyborg vs Bantamweight world champion, Ronda Rousey. The time has clearly passed for such a fight…as Cyborg continues to reign supreme in the UFC and Rousey has lost her title and now officially crossed over into the professional wrestling world. With such news comes reactions, and Rousey’s old rival shared her thoughts on the former Bantamweight queen’s new ventures when speaking to MMAFighting recently:

“I believe that she will be happy in WWE, and it’s completely different from the reality of MMA. For an example, wins and losses are decided before the shows.

I think it’s normal,” Cyborg responded in reference to Rousey not wanting to talk about her back to back losses in MMA. “In reality, we can only talk about things that we already overcame in our minds. She hasn’t overcome her MMA losses yet, even in another stage of her career. Sometimes people need professional help to get over it.”

With each going their very different separate ways, Cyborg still has her sights set on the big super fight…but with a different 135 lb champion now.

“My focus is to fight someone in my division because I hope it grows. But like I said, I’ve accepted to fight Amanda [Nunes] at UFC 226 on July 7, if she wants that so much. Now my manager is negotiating the terms so this fight happens.”

Cyborg has continued to make it clear that her legacy depends on building and leaving behind a strong Featherweight division after she retires otherwise she will feel like she won’t have accomplished as much as she truly could have. Before a potential super fight with Nunes, she wanted to defend against a fellow Featherweight but her tune has since changed and according to her, she has signed a bout agreement for the UFC’s 2018 international fight week event, UFC 226 on July 7.