Dana White was hailed by Mike Tyson earlier this week for siding with the boxing legend in his feud with Hulu and the UFC boss has now explained his side of the story.

Speaking in the wake of the latest edition of Dana White’s Contender series, the 53-year-old said,

“We were on the verge of a deal with Hulu to promote this Mike Tyson unauthorised biography. MY head of production came to me and said ‘i’m hearing that Tyson isn’t happy about this thing. So I called Mike and I said, we’re in a deal with these guys, we have a verbal to do this deal with them. He said, ‘Dana, they’re fu***** me.’ I said, ‘I’m out then. I’ll squash this deal. So I killed the deal and I told him that it was over and that we won’t be promoting that show for Hulu and then he did what he did.”

Tyson clearly appreciated the gesture from Dana White and tweeted his version of what went down whilst singling out the UFC boss for the way he handled it.

“Hulu tried to desperately pay my brother @danawhite millions without offering me a dollar to promote their slave master take over story about my life. He turned it down because he honors friendship and treating people with dignity.  I’ll never forget what he did for me just like,” explained the boxing megastar.

…I'll never forget what Hulu stole from me. (2/2) pic.twitter.com/kZKkY4hX5K

The streaming platform is due to air the ‘MIKE’ miniseries from August 25th but the 56-year-old is clearly livid at what’s transpired and further tweeted to outline his underdog status in the conflict.

“Hulu stole my story. They’re Goliath and I’m David. Heads will roll for this.”

Hulu stole my story. They’re Goliath and I’m David. Heads will roll for this.

Dana White’s friendship with Tyson goes back years. The pair were famously involved in a some airplane highjinks that went viral in 2014 as the pugilist made the MMA mogul vacate his seat before drawing the word d*** on his forehead when he’d later fallen asleep.

Tyson is no stranger to altercations at high altitude having after he was filmed repeatedly punching a passenger who had allegedly accosted him earlier this year. With footage appearing to show the man provoking ‘the baddest man on the planet,’ many celebrities came out in support of Tyson, including his old pal, Dana White. 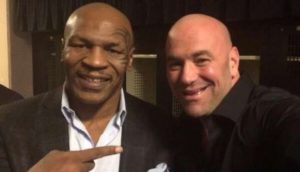 This article appeared first on BJPENN.COM
Previous articleBrandon Moreno’s coach will “be surprised” if fourth Deiveson Figueiredo fight happens, expects undisputed title fight against Alexandre Pantoja
Next articleDana White explains why he did not offer Bo Nickal a UFC contract despite his dominant win on DWCS
© Newspaper WordPress Theme by TagDiv