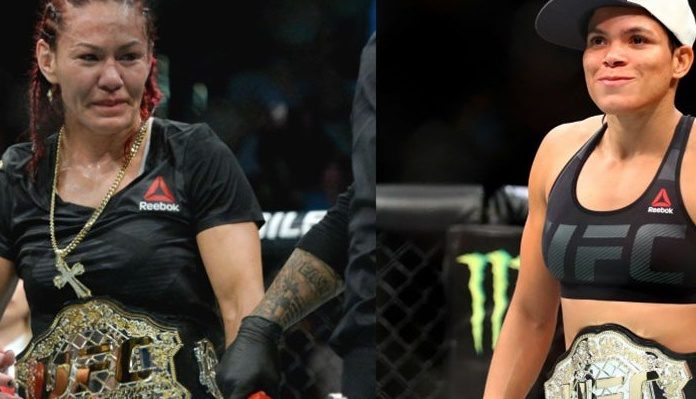 In the early stages of UFC 226’s coming together, it was looking like there was a possibility for the card to be the “super fight card” by playing host to three epic champion encounters.

The primary one being, of course, the clash between heavyweight and light heavyweight champions Stipe Miocic and Daniel Cormier (which is the only one to have materialized).

Also being worked on for the event was a huge flyweight title defense for 125-pound ruler Demetrious Johnson as he would have taken on 135-pound bantamweight champion TJ Dillashaw. Instead of fighting each other, each got rematches with former adversaries at UFC 227 which takes place on August 4th.

The final of the three possible super fights was the first ever would-be female super fight in MMA. Consisting of none other than the female fighting icon and UFC featherweight queen Cris Cyborg and the continually underappreciated bantamweight champion Amanda Nunes.

Cyborg last defended her title at UFC 222 with an easy first-round TKO of Invicta FC bantamweight champion Yana Kunitskaya. Around this time, the fight to make seemed to be Cyborg vs Nunes.

But after Nunes’ victory against Raquel Pennington at UFC 224 and Holly Holm’s win over Megan Anderson at UFC 225, the best time seems to be now.

Dana White even stated after UFC 226 this past Saturday that the fight is still the one they’re working on for each champion.

And now Cyborg has revealed that she has agreed to the super fight for the UFC 228 date of September 8th in Dallas, Texas.

Let’s go @Amanda_Leoa you called me out now you have to handle it!

Let’s go @Amanda_Leoa you called me out now you have to handle it!

For Nunes, she has two options for possible next title defenses in Ketlen Vieira and the previously mentioned former champion in Holm. However, Cyborg really has no one other option than Nunes to fight at the moment so she needs this one more than Nunes does if she wants to stay active.

Regardless, when there’s history be made it can be quite enticing. Just ask any of the previous dual-division champions in UFC history.