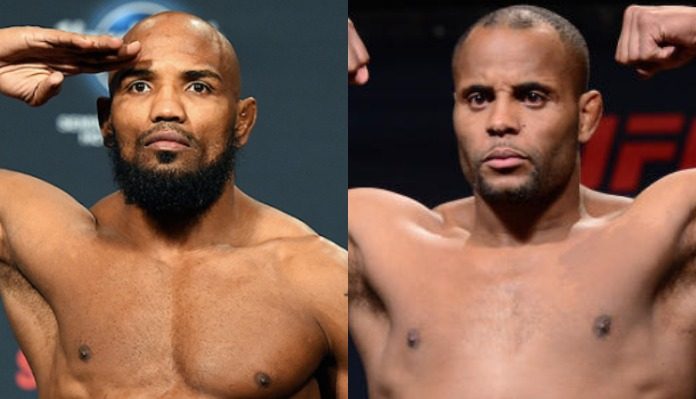 Daniel Cormier is currently the hottest commodity in the MMA world. And after becoming a dual-division champion at UFC 226, rightfully so.

The one person who fits that description is the current top-ranked middleweight contender Yoel Romero who is looking to leave his home of 185 pounds.

Having now suffered two defeats to middleweight king Robert Whittaker, Romero has his sights set on the 205-pound champ.

With an even larger target on his back now, Cormier took the time to address Romero on today’s episode of UFC Tonight.

“Here’s the deal…” Cormier said, “I never wrestled Yoel Romero, but in wrestling, he probably would have served me up. He’s one of the great wrestlers of all-time. But, you don’t fail a class and then get moved up a grade to the next one.

Chael Sonnen did that one time, but I don’t know what was going on. Chael has a way of doing that. Let’s just say that.”

Despite not thinking Romero should get an instant crack at his belt, that doesn’t mean that Cormier isn’t interested in still defending it now that he has two.

“I don’t want them to take one of these belts. So I will defend it. I will defend the light heavyweight title if the right fight presents itself.”

Who that next and possibly final light heavyweight title defense would be against for Cormier remains to be determined. However, the double champ has stated that he has an interest in it being against a former champion in Mauricio ‘Shogun’ Rua.

Shogun will take on Anthony Smith in the main event of UFC Hamburg later this month on July 22nd.