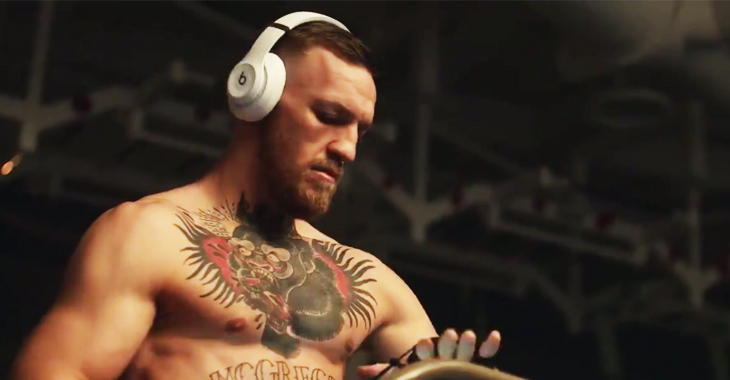 The lights, the money, the celebrities, the fame, cars, and all the clothes. Conor McGregor is scooting around Vegas in a fire-spitting Lambo and a fleet of Rolls-Royces. He’s going to box the undisputed best boxer of our generation in just a couple of days. It’s hard to believe that his first UFC fight was only 4 years ago. Two titles in different weight classes and a fight with “Money” Mayweather later, and it’s even harder to imagine him coming from a modest life working as a plumber. A new commercial from Beats By Dre does a great job at putting things in perspective.

“The world is a noisy place. Whether you’re chasing boxing history or the thing that matters most to you, it’s important to block out the distractions and remember how you got here. #AboveTheNoise” The video draws from Conor McGregor’s days as a young kid in Crumlin, Ireland, while also showing the impact he’s had on the people of his motherland. It centers around the buzz of a Prizefighter of the neighborhood kids, Liam. There’s a buzz about a big fight, but it’s not McGregor’s, it’s Liam’s. The boy wraps his hands and the video flashes back and forth to McGregor doing the same. His friends talk of his impeding fame. As soon as all of this seems familiar, Notorious B.I.G. hits hard rapping about a rags to riches story. This huge Beats ad is just one piece resulting in the culmination of McGregor’s career this Saturday.