Fan favorites Conor McGregor and Donald Cerrone will square off in the headliner of UFC 246 on January 18 live from T-Mobile Arena in Las Vegas.

McGregor and Cerrone will be competing at welterweight, despite the fact that both men have found greater success in smaller weight classes.

‘Mystic Mac’ will be returning to the Octagon for the first time since suffering a fourth round submission loss to reigning UFC lightweight champion Khabib Nurmagomedov at UFC 229 in October of 2018.

Prior to his setback to ‘The Eagle’, Conor McGregor was coming off back-to-back wins over Nate Diaz and Eddie Alvarez respectively. 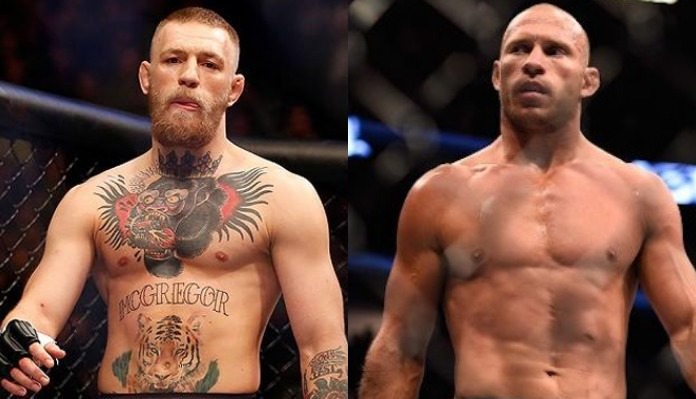 As for Donald Cerrone, ‘Cowboy’ will be returning to the welterweight division after putting together a 2-2 record in his most recent four-fight stint at lightweight.

Cerrone is coming off stoppage losses to Justin Gaethje and Tony Ferguson in his two most recent efforts. However, prior to those setbacks, ‘Cowboy’ had strung together three wins over Al Iaquinta, Alexander Hernandez and Mike Perry.

While there has been very little trash talk from either man in the lead up to the UFC 246 main event, there is no denying that Donald Cerrone and Conor McGregor do have a history.

The Ultimate Fighting Championship recently put together a video showcasing all of the times McGregor and Cerrone have crossed paths in the past.

Check it out below courtesy the UFC’s official Instagram Page.

According to his coaches, Conor McGregor is in the best shape of his life ahead of this month’s highly anticipated showdown with ‘Cowboy’.

With that being said, UFC President Dana White is not impressed that many fans and analysts are already writing the promotions most winningest fighter (Cerrone) off for the UFC 246 main event.

Who are you picking to emerge victorious when Conor McGregor and Donald Cerrone throw down on January 18 in Sin City? Sound off in the comments section PENN Nation!