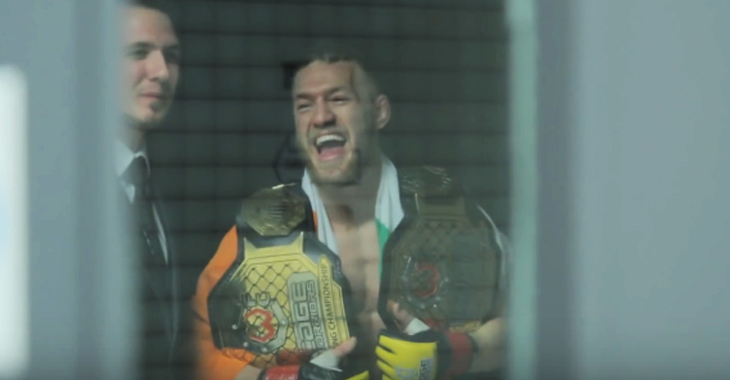 It was November of 2016. Conor McGregor finished Eddie Alvarez and held two UFC titles above his head, declaring that the Champ Champ does what he wants. This wasn’t the first time this happened. Before the flame-spitting Lamborghini’s and Gucci minks, McGregor achieved the same accomplishment in Cage Warriors. He had already won the featherweight title and was set to defend it, but his opponent pulled out. McGregor made the decision to go up a weight class instead and challenge Ivan Buchinger at Cage Warriors 51 which changed everything. If the scenario sounds familiar, it should. McGregor dealing with opponents changing and using it to springboard onto even bigger things has been a mainstay in his career. The interview he did that night sounds like it could have been done this week.

“I feel good. I seen it in me head. It’s no surprise, you know? I visualized it. No matter what people say, people can put me in a f-cking room, people could throw bricks at me and call me every name under the sun. I’d still walk out thinking I’m the Don Juan. You know what I mean? Thinking I’m the number one. That’s the way I just feel. I don’t give a f-ck about nothing else. Believe that. It makes no difference [the replacement of my opponent]. If you start dwelling on what the other guy is going to do, it messes with you head. So, I just find out what I’m gonna do.”

Today’s the day @TheNotoriousMMA became a Cage Warriors 2-weight champion back in 2012. 👊

The #McGregorTakeover is underway. We’ll be running through the archive all day – keep your 👀 here for some old-school McGregor footage 👌 pic.twitter.com/zIhWE4fuKa

“I’m gonna go have fun and embrace every bit of it because no matter what happens, no one can take these [belts] away from me. I just like to embrace every bit of it. […] Yeah, I hope [that UFC call is coming next]. I hope so, yeah. We’ll see what happens, you know what I mean? Just keep positive. Keep believing, keep training, keep trying to learn every day. Trying to learn new sh-t everyday. That’s it. If the call comes, the call comes. Believe in yourself. Believe that you’re better than everyone else. Be cocky and be confident and be humble. Train hard.” — Conor McGregor speaking to Andrew McGahon at SevereMMA.

As the critics will always say, no, he didn’t defend that second Cage Warriors title either. Instead, he got the call from the UFC for his debut against Marcus Brimage. He’d continue on building a 15-fight win streak to go with his two Cage Warriors belts he vacated, all of those victories ending in a finish besides one decision against current UFC featherweight champion Max Holloway. After a loss to Nate Diaz — which he rectified immediately — and his win against Alvarez, that puts us up to where we are now. After the enormous boxing match with Floyd Mayweather, McGregor is still the Champ Champ and still doesn’t care what anyone thinks of him. The more things change, the more they stay the same. We’re all waiting to see what comes next in the year 2018.