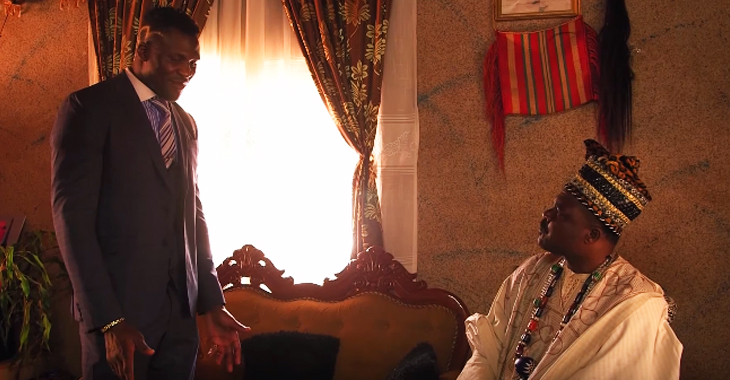 Glossy video packages, crisp suits, $50K bonuses. This is a world still brand new to Francis Ngannou. Just five years ago, the man was homeless and didn’t even know that mixed martial arts existed. The only thing he knew, is that he saw something bigger for the life which contained him. Ngannou didn’t just see the vision behind closed eyes and admire it, he went out to seek it by any means necessary. For himself, for his family, for his village.

“Even during my pregnancy, [Francis Ngannou] was always moving so much I couldn’t sleep. But no, he wasn’t fighting. Never fighting. And he would never let someone hit another kid.” — Francis Ngannou’s mother

He was barely a teenager when he went to work in the sand mines. It even more brutal than it sounds. People lose their lives working a job like that. This was a realization that the future UFC heavyweight title challenger would become all too familiar with. He saw young boys and older men working side-by-side, making the same wage with backbreaking labor. Finally, he escaped. His next job was loading huge bundles of clothing into trucks. He made it into game. Although, most normal people wouldn’t consider throwing around over 200lbs a game. “This is where I ended up when I left Batié. We would load and unload trucks. Carry the bags. These are clothes bundles and they weight between 55kg (121lbs) for the smaller one and up to 100kg (220lbs) or even more. We would have fun with the bundles. We would do tricks [loading them up]. — Francis Ngannou

Francis Ngannou doesn’t go into detail of how he ended up homeless in France, but that he was happy even when he was homeless. He wasn’t looking for a paradise that was already there. He was looking to build a paradise for himself. He eventually found a boxing gym, which finally led him to the MMA Factory. The rest is a history that is still being written with record-breaking punching power. Ngannou has been beating up head coach Fernand Lopez ever since.

“I understood quite quickly he was living in precarious situations. I reacted like i would usually do and gave him a bag with clothes and fighting gear and told him he had complete access to the gym. I had a session with him and I understood immediately that there was something different. […] The first day, I was pushing him around as I had better technique. So, I was able to compensate the raw strength advantage he had. But after a few weeks, I couldn’t have fun with him anymore. He would hurt me. He would beat me.” — Head coach Fernand Lopez of the MMA Factory.

This look back at the amazing journey Francis Ngannou has had comes directly behind the biggest fight of his life. In two weeks, he’ll fight Stipe Miocic for the UFC heavyweight title and look to land another uppercut heard ’round the round. However, for the people of Cameroon who already greet him as ‘champion’ when he returns to Africa, it’s clear that the decision that night doesn’t matter. Just like Ngannou’s search for his own paradise, the village isn’t looking for a champion to be crowned. They already have one.

“Him coming back to Cameroon excites us even more because despite all the honors, he still thinks about the village. It really honors us. It shows that this is someone that is proud of his culture and traditions.” – Tchouankam, the King of Batié.