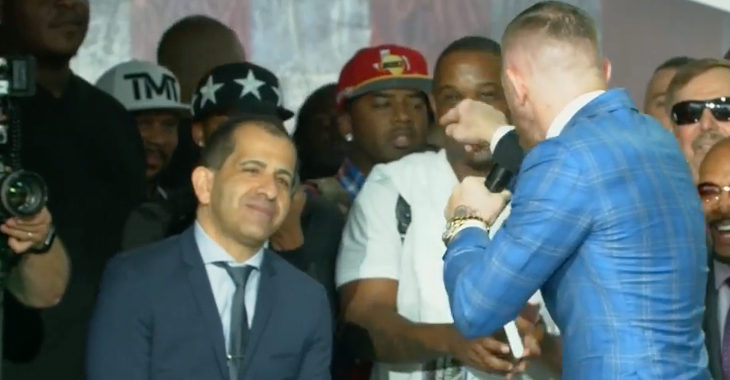 In Los Angeles during the first stop of the Mayweather vs McGregor world tour press conference hyping up their multi-million dollar boxing match, Conor McGregor’s mic was cut off when it was Floyd Mayweather’s time to address the crowd.

McGregor was not happy with the technical issue and targeted Showtime and executive vice president and general manager of Showtime Sports, Stephen Espinoza as enemies in the buildup for the fight. In Toronto for the second stop on the world tour, McGregor let it be known calling out Showtime and Espinoza. McGregor hurled insults at the Showtime Sports executive, pointing him out as a “weasel” and a “bitch.”

“While we’re at it, f*ck Showtime too,” McGregor said as the crowd of fans favoring McGregor erupted in support of basically everything the brash Irishman said.

Espinoza kept his composure and remained professional throughout the world tour even with McGregor’s “weasel” insults being thrown his way. Although Espinoza kept his cool, the Showtime executive did admit while on this week’s episode of The MMA Hour that McGregor’s words bothered him but more so on the fact that “The Notorious” insulted his staff. “It bothered me a little bit,” Espinoza said (transcribed by Marc Raimondi for MMA Fighting). “I think anyone who is personally insulted is bothered. But I’ve been called a lot worse by people I respect more than Conor, so that in itself wasn’t a big issue to me. What bothered me about the whole thing was his comments about Showtime.”

Espinoza mentioned that a lot of people working for Showtime had to make sacrifices to put the fight and promotion together.

“I know my staff and I know the kind of people who work for us,” Espinoza said. “On that timeframe, on those 72 days, there are literally dozens of people who are giving up dinners with their kids, time with their spouses, giving up things that they would rather do with their nights and weekends for the success of this pay per view, which ultimately the bulk of that money is going to Floyd and Conor. And making them both very rich men.

“So to have Conor insult them, by extension, to say ‘f’ Showtime or whatever, when there’s an entire team of people who are making personal sacrifices to make sure his event is successful and generates money for him, it just seemed a really short-sighted comment and really unprofessional.”