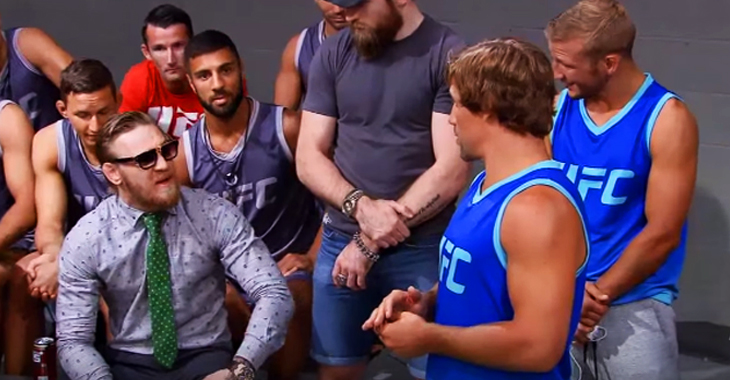 A stacked UFC 217 card is coming just around the corner in November, complete with (at least) two title fights. One of which will be Cody Garbrandt defending his bantamweight title against bitter rival and former champ, TJ Dillashaw. Behind one of the most skilled match-ups the UFC can make, lies the fire of a heated gym triangle surrounding the two fighters and once-shared friend, Urijah Faber. Sometimes featuring cameos by coach Duane Ludwig, the feud reached its boiling point on season 25 of The Ultimate Fighter, coached by Garbrandt and Dillashaw. However, this MMA drama owes its origins to an earlier season. On a recent episode of The Joe Rogan Experience, Faber revealed that Conor McGregor served as a catalyst in this ongoing Team Alpha Male saga.

“The whole thing with Conor [McGregor] happened on the [Ultimate Fighter 22] TV show before this. Before any of this happened, Conor McGregor started calling [Dillashaw] a snake because me and Conor had one conversation. We were sitting there and he goes, ‘Man, congratulations on TJ for defending his belt,‘ because he was still on our team his last title defense. And I go thanks, [McGregor] goes, ‘but what’s up with Duane [Ludwig] saying no one on your team wants to be a champions, that’s weird.‘ I said, oh he’s just bitter because he’s trying to get everyone to go out to his camp, he’s just being a hater, this and that. He took that little bit of drama between me and Duane […] then the next time he saw TJ he goes, ‘oh, there’s the snake in the grass‘, and just built it into this big thing.”

“[Conor McGregor] is so good at seeing people, right?  So, that took what really happened — TJ [Dillashaw] got paid to go somewhere else, me saying alright fine, if you’re going to do that, that’s cool but if you’re on that team, you’re on that team — then Conor turned the public around on him. It came out later after [the show] and so then TJ became the victim. Now, TJ’s new story is I got mad he was training with Duane Ludwig and I kicked him off the team.” — Urijah Faber on the Joe Rogan Experience.

Watching the infamous clip from season 22 of The Ultimate Fighter now, it’s clear that Conor McGregor kicked off more than just a team brawl that day. Was McGregor just telling the truth as he says, or was it orchestrated to pit a couple of potential opponents against each other for a little fun and mischief? Either way, it’s fascinating seeing how it has all played out with new knowledge of Urijah Faber and Conor McGregor’s backstage brodown. Right now is the perfect time before Garbrandt and Dillashaw’s fight on November 4th to re-watch both of those seasons of The Ultimate Fighter.