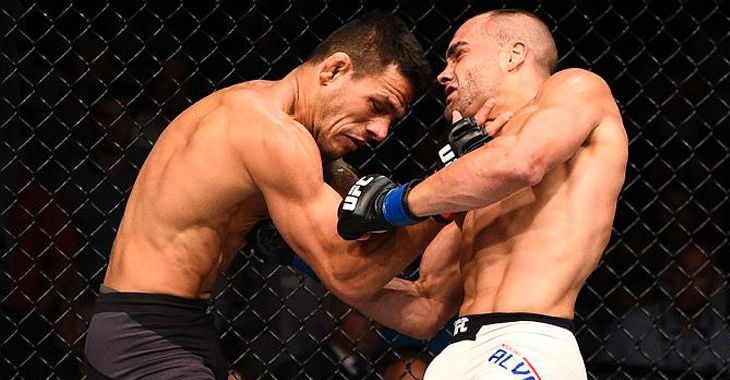 While Conor McGregor and Rafael dos Anjos may not have fought at UFC 196 for the lightweight championship as initially planned, McGregor’s training for dos Anjos very well could have helped him prepare for his current opponent, Eddie Alvarez.

McGregor, who faces Alvarez in the main event of UFC 205 this Saturday, where he hopes to capture the lightweight championship and become the first man in the history f the UFC to simultaneously hold two championship belts, was set to face dos Anjos in the main event of UFC 196 back in March for the lightweight title. Unfortunately, just two weeks before the fight, dos Anjos pulled out of the fight with a broken foot and was replaced by Nate Diaz, who ultimately handed McGregor the first loss of his UFC career.

Now, with McGregor’s fight with Alvarez just days away, the featherweight champion’s coach, John Kavanagh, believes that while Alvarez and Dos Anjos actually have some similarities, the current lightweight champ is an easier matchup He spoke to MMAJunkie:

“I think Alvarez is a little bit more straightforward. Dos Anjos obviously has a world-class submission game on the ground. Alvarez is more basic on the ground. He’s just going to hold you there and throw some shots, whereas dos Anjos has very slick jiu-jitsu. In other respects, they’re both quite similar in that they’re both physically similar, and similar style. A couple punches, then try to get a takedown. But I think Eddie is slightly the easier fight because he’s orthodox and doesn’t have quite the submission game as dos Anjos.” “Conor is best when he’s kept busy like this. As long as there’s no injuries stopping him competing, I think it actually works out for the best. If you take long breaks between fights, sometimes you can overthink things. Sometimes fighters who haven’t fought in more than a year and they’re nervous and not familiar with those feelings. He’s fighting every couple weeks so it’s very familiar, he’s very comfortable backstage. It’s actually worked out to be a blessing in the long run and he’s had a lot more preparation for this lightweight title fight than he would have if he had gotten this (shot at a second title) last March. It’s positive.”

Only time will tell if McGregor is able to capture the lightweight title and make history on Saturday in New York.