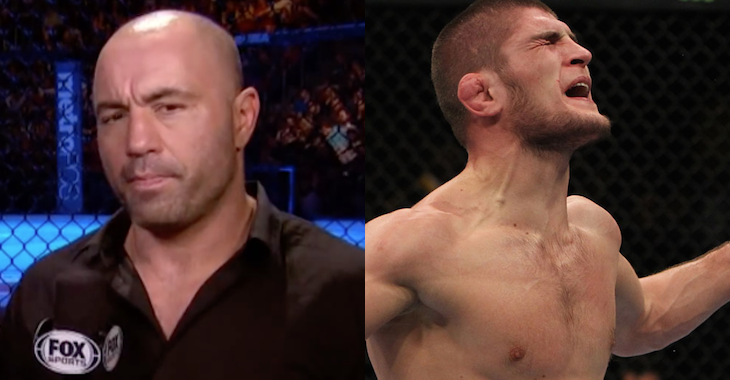 The UFC commentator was only a few feet away from the action when “The Eagle” locked in a neck crank in round four which forced the Irish superstar to tapout.

Immediately following his decisive victory, Khabib Nurmagomedov proceeded to leap out of the cage in order to attack McGregor’s teammate Dillon Danis. 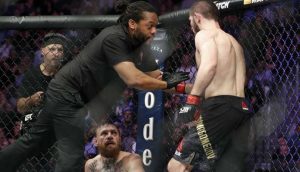 Khabib’s post-fight actions at UFC 229, which spawned multiple brawls, currently have the undefeated lightweight champion on a temporary suspension from the NSAC, with an official hearing to determine his full punishment slated for December.

While Joe Rogan certainly does not condone Khabib’s UFC 229 post-fight actions, he recently admitted that he saw “The Eagle” being provoked moments after his historic win.

“Dillon (Danis) was absolutely insulting Khabib, saying something to him and provoking him and then Khabib just jumped over the cage and attacked him.” Rogan, the host of the Joe Rogan Experience said on-air. “I couldn’t believe my eyes. I thought Khabib was just going to jump to the top of the cage and say ‘F you’.”

With that said, the current Bellator fighter, Dillon Danis, has denied making any anti-Islam comments to Khabib Nurmagomedov before the now infamous UFC 229 brawl.

“Khabib Nurmagomedov’s fans are attempting to smear me in an effort to justify his actions,” Dillon Danis wrote on his Instagram. “I have never and would never denigrate anyone’s religion. I look forward to the results of the Nevada State Athletic Commission investigation which will reject this bullshit claim and put the blame where it belongs.”

While there is no proof that Danis made any controversial remarks to Khabib following the Russians win at UFC 229, there is no doubt that Joe Rogan had a birds eye view of how the whole incident went down.