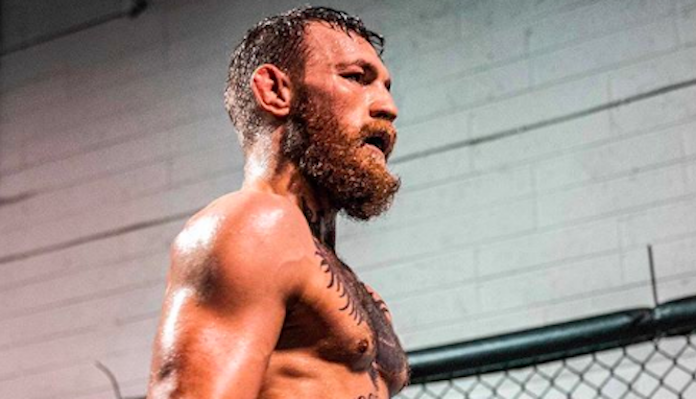 Immediately following his victory over the Irish superstar, “The Eagle” proceeded to leap out of the octagon and attack McGregor’s teammate Dillon Danis.

Nurmogmedov’s post-fight actions caused brawls to ensue both inside and outside of the cage.

In a recent interview with ESPN’s Ariel Helwani current UFC heavyweight champion Daniel Cormier, who was cage side during the madness at UFC 229, told a crazy story about some random dude in a nice jacket who had found his way into the octagon in hopes of helping Conor McGregor.

“There’s a guy behind me. He’s wearing this nice jacket. … So he’s standing behind me, and he goes, ‘Who do you got in the fight?’ This guy’s completely not into the game, right? So I go, ‘Yeah, I’m gonna go Khabib.’ So after the fight, when we all jumped the rail, I’m like in the octagon pushing, and the guy’s like checking on Conor McGregor. He was like a fan. He was just like a fan that jumped the rail when everyone else jumped the rail and got all the way to the octagon – he was like checking on Conor. I (later) asked my wife, ‘Salina, what happened with that guy? Was he with McGregor?’ She goes, ‘Daniel, after he went and checked to make sure Conor was OK, he just got back in his seat.’ I swear to God. He just climbed the rail and got back in his seat. I was like, ‘What in the world just happened!? What in the world just happened!?’ It was crazy. How did this dude end up in the octagon, and then he checked to make sure Conor was OK, and then he went back and sat down.”

The man in the “nice jacket”, UFC fight fan David Martin, shared the above video pointing out his involvement at UFC 229.

Out of all the stories that have stemmed from the UFC 229 post-fight brawl between Khabib Nurmagomedov and Conor McGregor, this one may just be the craziest.