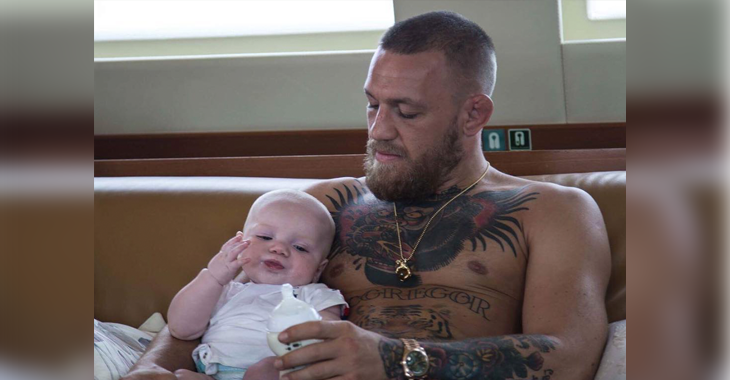 Could you imagine watching Conor McGregor Jr. fighting in a main event in a couple of decades?

It is certainly a possibility as the current UFC lightweight champion says he is already putting his son through training at the age of five months.

During his Q&A event that took place in Glasgow recently, “The Notorious” stated that he is looking forward to putting his son into sport competition. “I have a son now. When he grows up I’m going to put him into sport,” said McGregor (transcribed by Robert Hynes for the Irish Mirror) “I believe sport is the best thing you can do often hold.

“I’ve already begun training him. He’s already leaps and bounds ahead of schedule.

“He’s only five months old. He can stand balance on his feet. I have this little method where I have him doing a squat.

“I’ve been doing little things like that and that’s from the bell, from day one. It’s like a blank canvas.” McGregor went on to say that he believes his son will be a standout and with the resources McGregor currently has, it will only be in his son’s favor to achieve that. “The Notorious” added that he will not force his boy to compete in combat sports but will certainly teach him how to fight.

“I think I’m going to raise a special, special young boy who’s going to go on and achieve great things. I’m very excited about that.

“Like I said I’m going to put him into training, sport, fighting. I’m not going to push him into fighting. If he wants to fight that’s great. If not it’s his own decision but he will be skilled in how to fight.”

Do you think we will see Conor McGregor Jr. fighting at the elite level in the future? Let’s discuss this one in the comment section.